Three Dutch researchers, Ronald Brouwers, Ad Reniers and Matthieu de Schipper, of the Delft university of technology (TU Delft) are part of the US-Dutch coastal research team that won the first prize of the Ocean 180 Video Challenge: a prize for science communication.

US-Dutch research team Carthe investigates how oil spills move from deep water onto the beach. The team uses drones for their research. This has been filmed and used for the winning movie entry, titled Drones at the Beach.

The Ocean 180 Video Challenge offers scientists an opportunity to explain research importance and outcomes to non-experts.

Over 37,000 middle school students across twenty-one countries selected the winning videos after a two-month evaluation of the top entries that best explained scientific results and significance.

In 2014 the consortium for Advanced research on transport of hydrocarbon in the environment (Carthe) started to study ocean currents in the Gulf of Mexico to be able to predict where oil or other toxins may go in the event of a future spill.

The goal was to get as much accurate data of nearshore wave and current movements as possible and enter this data into computer models to make accurate ocean current predictions. 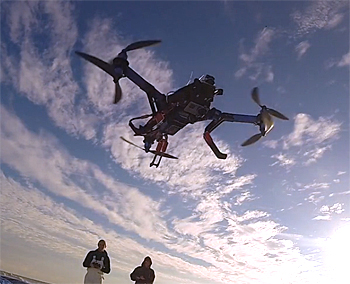 One of the experiments was the injection of a pink colored dye along and outside the surf zone to trace its movement through the water column. Various in-situ instruments recorded water and atmospheric conditions.

The drones gave the researchers spectacular footage of the pink substance moving along the Miami coast line.

Official scientific publication
One of the contest requirements was to have an accompanying peer-reviewed journal article, which the Carthe team published in the 2015 American Meteorological Society on Surf zone monitoring using rotary wing Unmanned Aerial Vehicles.

Graduate student Patrick Rynne, a member of the Carthe video creation team, explained that the ability to
communicate scientific findings is an essential skill to develop. "Although it is critical that research goes through the peer-review process, we also have a responsibility to deliver our findings in a digestible way to the public."

Connecting classroom lessons and scientific discoveries
Teacher Kathryn Blysma, whose students at Dr. John Long Middle School in Wesley Chapel, FL participated as judges applauded this effort to connect classroom lessons and scientific discoveries. "Too often, students only see science in   isolation with the benchmarks assigned to them, rather than the real-world application of that learning,” said Blysma. “Making connections between classroom learning and the real-world is critical to being good stewards of our planet."

This news item was originally published on the website of Delft University of Technology (in Dutch only), Golf of Mexico Research Institute and Ocean180 Challenge.

Professor Ad Reniers of University of Miami and Delft University of Technology explains who the path of pollutants can be tracked in coastal areas.