Delta cities share experiences on flood control and heat waves at C40-workshop in Rotterdam, the Netherlands 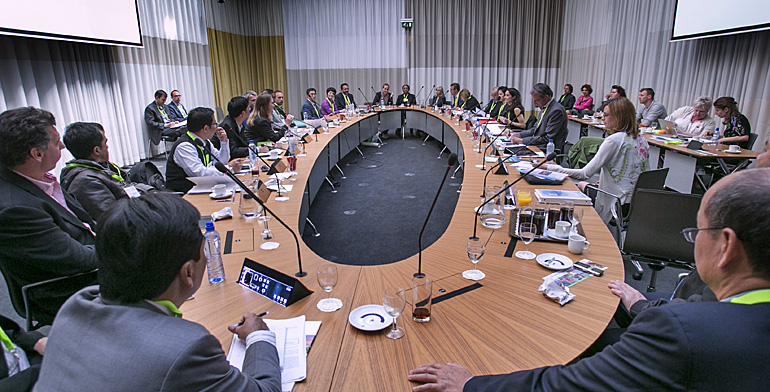 From 3 - 6 June climate adaptation specialists from 23 delta cities gathered in Rotterdam, the Netherlands for the C40-workshop on extreme weather events and lessons learned.

The C40-workshop was organized by the Rotterdam Climate Initiative and focused mainly on flood control, water management and heat waves.

Cohen told that a staff of 35 people is working full time on this recovery plan that is to appear shortly. "The plan aims at reducing the flood risks but its goals also need to be achievable. Its technical measures will concentrate on a more resilient built environment. For specific areas the plan will directly address the resilience of the local communities", Cohen told. 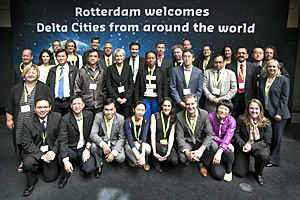 Deputy mayor Cedric Grant of New Orleans shared his lessons learned from the flooding after Katrina in 2005. "What you plan, you will not do", he told his audience. "Much is about flexibility as cell phones do not work and sewage treatment plans go down."

Grant warned about the Katrina-fatigue. "The recovery of the city is a long process and it is difficult to keep everybody engaged. And people will only return when they feel their city is safe again."

Water sensitive urban design in Melbourne
Senior sustainability policy officer Beth Mclachlan of Melbourne City shared her experiences on heat waves. From 1997-2009 the city suffered from extreme drought with the volume of fresh water in the Thomson reservoir dropping to only 16% in April 2007. "There was drinking water left for only two more months. In response  we built a desalination plant that can produce drinking water up to 42 percent of the current demand. We also started a programme for water sensitive urban designing, including parks and sporting sites".

More trees for cooling
Mclachlan mentioned Melbourne is predicted to have more days with temperatures exceeding 35 degree Celsius. "It was predicted to increase from 10 to 13 days in 2020, but this is already occurring now. We have started a forest strategy that includes more trees in the city, increasing the canopy cover by 22 percent". Mclachlan explained that the trees are carefully selected drought resistance species, in order not to interfere with the water safety programme.

Sharing the sense of urgency to act 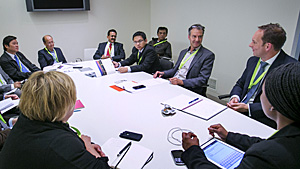 Programme manager Arnoud Molenaar of the Rotterdam Climate Initiative closed the workshop. He noticed the big differences between the delegates. " Some have just started their first climate adaptation studies while other cities already take measured based on the long term strategic policy plan. This makes it so interesting to share our experiences as delta cities.  Although the circumstances can be very different, we share the same sense of urgency to act.`

Molenaar invited all delegates to come back to Rotterdam next year for the 2nd international conference  Deltas in Times of Climate Change, 24-26 September 2014.