Minister Dayal signed an Memorandum of Understanding with Deltares and water education facility Unesco-IHE about further cooperation in the future relating to climate adaptation and disaster risk reduction in Mauritius. 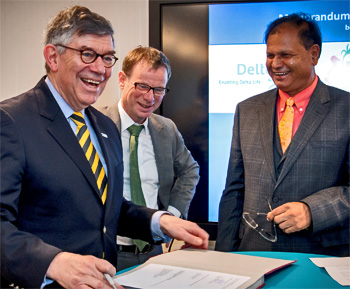 Training and capacity building
The MoU continues the cooperation on climate adaptation in the areas:

The system was delivered in the summer of 2015 by Deltares, providing Mauritius, as the first Small Island Developing State (SIDS)’ in the Indian Ocean, with its own flood warning system so that the country will be better prepared for extreme high water as a result of, for example, cyclones. (on top illustration, in red is sea level increase of 0.75 m). 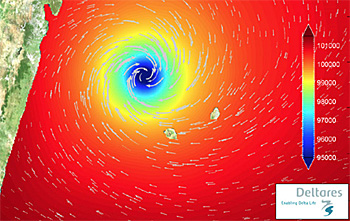 Presentation in EWS of the large cyclone Gamede that hit Mauritius in 2007.

Prediction of water levels and threshold crossings
The early warning system for Mauritius is based on Deltares' Delft-FEWS open data handling platform.

This platform was initially developed as a hydrological forecasting and warning system that has been extended to cover tide, storm surge and wave forecast.

Now FEWS is a sophisticated collection of modules designed for building a forecasting system, customised to the specific requirements for inland and coastal areas of an individual organisation.

The end-product of the Mauritius early warning system (EWS) is a set of intuitive tables in HTML format for each island, containing time- and space-varying information on threshold crossings by predicted water levels.

At multiple locations for each island, the operator is informed in one glance about the recommended warning level, from 'safe' to 'watch', 'alert' or 'warning' based on water level forecasts.

This news item was originally published on the websites of Deltares and Unesco-IHE.