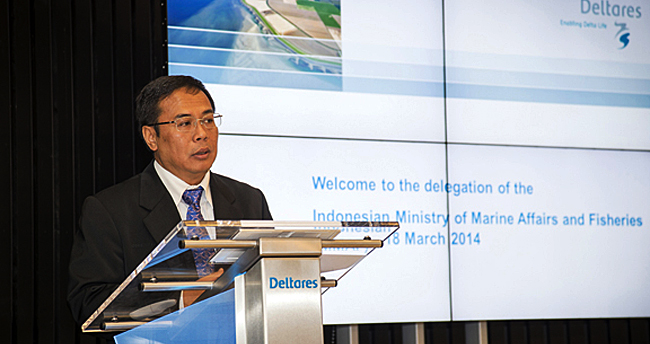 The Indonesian Ministry of Marine Affairs and Fisheries (MMAF), Dutch-based environmental organisation Wetlands International and research institute Deltares agreed to collaborate in the effort to tackle the erosion problems of Indonesian coasts.

Indonesia has plans to restore the eroding areas of its coastline in Java and Bali with nature based approaches inspired on Dutch methods.

A high-level Indonesian delegation, including Mr. Eko Rudianto (on top photo), the Director of the Ministry of Marine Affairs and Fisheries of Indonesia, visited the Netherlands to learn more about nature-based techniques for flood prevention, the Building with Nature approach.

The future collaboration was announced on the final day of the visit, on 21 March. 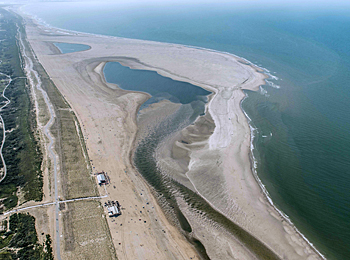 One of the examples of Building with nature is the Sand Engine along the Dutch coast. It is a new way of beach nourishment. First a sand peninsula was created and now wind, tide and waves distribute the sand along the coast.

Eager to collaborate
Mr. Eko Rudianto said: "We are looking for alternative ways to solve coastal erosion problems in Indonesia and we are eager to collaborate with the Netherlands in Building with Nature approaches."

Both Deltares and Wetlands International applauded the initiative of the Ministry to test the innovative Building with Nature approach in Indonesia.

Nature-based flood protection
The technical exchange visit by the Indonesian delegation was to learn about the Dutch approaches for integrated coastal management.

The visit focused in particular on how the Netherlands apply nature-based techniques for flood prevention.

The delegation saw various Dutch examples of 'Building with Nature', including the Sand Engine and the restored salt marshes of the Wadden Sea.

Java: recolonise mangrove belts
Along the coast of Java, Indonesia plans to reclaim eroded land by trapping sediment by means of permeable dams, so that its mangrove belts can recolonise and help protect the coastline against erosion after which Indonesia can work on sustainable coastal management.

This technique is inspired by a method used by the Dutch for over a century to reclaim land by enhancing salt-marsh formation.

In Java the coastline is retreating rapidly with tens of meters, and in extreme cases, more than a hundred meters per year, as a result of mangrove deforestation and land subsidence. This has major implications for Indonesia’s coastal safety, economy, ecosystems and fisheries.

Bali: beach nourishment with Sand engine
In Bali, construction of the airport in the sea was followed by erosion of Kuta beach, a popular tourist destination and a surfing hotspot. Indonesia is interested to restore and protect this beach by mimicking an innovative method also applied in the Netherlands called the Sand Engine.

The Sand Engine is a huge volume of sand that has been applied along the West coast of the Netherlands. Nature, namely wind, waves and currents further spread the sand along the coast and make the coast broader and safer. 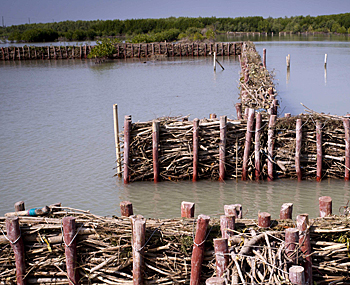 Pilot for mangrove restoration in Demak District
at the North coast of Java.

Already started with pilot
The Indonesian Ministry is already, with support from Deltares and Wetlands International, implementing a pilot project in Demak District at the North coast of Java where the sea has already swallowed hundreds of meters of land.

The approach using permeable dams seems promising as the waves inside the grid are lower, the mud is building up steadily and mangrove seedlings are already re-appearing.

About Building with nature
Building with Nature is an approach whereby sustainable coastal development is planned, designed and operated whilst creating new opportunities for nature and at the same time utilising natural forces whenever possible.

Rather than presuming the worst – that a coastal infrastructure project will harm the natural environment – and acting defensively, Building with Nature explores positive, pro-active opportunities, using the dynamics of the natural system as a starting point.

This news item is based on press releases on the websites of Deltares and Wetlands International.

In this video Hendra Yusran Siry of the Indonesian Ministry of Marine Affairs and Fisheries (MMAF) and Femke Tonneijk of Wetlands International, explain the pilot project to restore the coast in Damak district, Java. (video by Nanang Sujana)