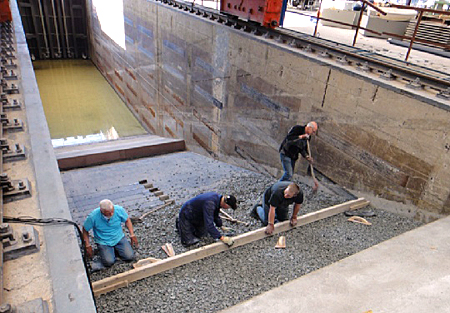 Research institute Deltares is conducting large-scale physical model tests in one of the biggest wave flumes in the world: the Deltares Delta Flume. The purpose of the study is to test whether it is possible to reinforce a revetment by placing a concrete block revetment on an existing block revetment.

Experiments in wave flume
In the Deltaflume Deltares has constructed a section of a dike on a scale of 1:2 in the Delta Flume. This flume has a length of 235 m, a width of 5 m and a depth of 7 m. Waves can be generated up to a significant wave height of 1.5 m. During the experiments, wave characteristics, water pressure in the structure and damage to the dike are measured.

Large dike enforcement programme
The experiments are being carried out for Projectbureau Zeeweringen, a joint project of Rijkswaterstaat and Waterboard Scheldestromen to enforce 325 km dikes on the Dutch coast. Total costs of the project are 900 million euro and the enforcement has to be completed in 2015. 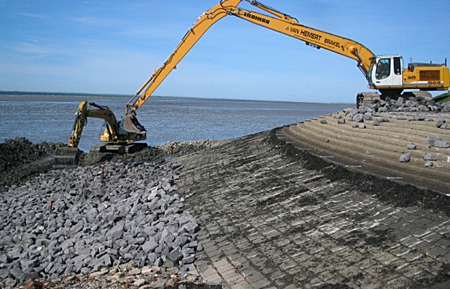 Focus on deltas and coastal regions
Deltares is an independent institute for applied research in the field of water, subsurface and infrastructure. Its focus is on deltas, coastal regions and river basins. Managing these densely populated and vulnerable areas is complex. All over the world Deltares works closely with governments, businesses, other research institutes and universities. With over 800 employees it is the most renowned Dutch water research institute. Deltares motto: Enabling Delta Life.

This press release was originally published on the website of Deltares (in Dutch).