With this new method, flood maps all over the world - with details up to 30 metres - can be produced, going back up to 1999.

The research, that was performed by Deltares researcher Gennadi Donchyts, was presented at the AGU Fall Meeting in San Francisco, USA, this week (on top photo). 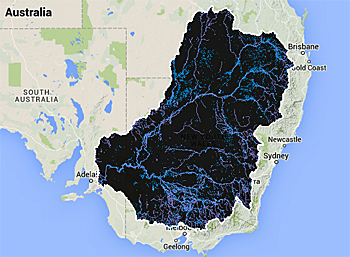 Mapped flood data of the Murray-Darling basin (Australia) presented in the well-known lay out of Google maps.

New algorithm
Deltares uses an algorithm which makes it is possible to extract the required information from satellite data, without heavy downloads or local calculation capacity.

This information is combined with knowledge about the flow of water over the terrain and OpenStreetMap open GIS data.

The storage and calculation are arranged by Google through it’s Earth Engine.

The research was performed based on two locations: Mekong river delta in Vietnam and Murray-Darling basin in Australia.

This research received funding from EU project eartH2Observe, the Servir Mekong project and is performed in cooperation with the Delft University of Technology.

Next step: global level
The next steps will be to get data from other satellites to increase the accuracy of the maps and to extend the algorithm on a global level.

Project coordinator Jaap Schellekens, Deltares: “The research shows that it will now be possible, with only one single application, to look at any location in the world ,zoom in until 30 metres and see where it was flooded in the last fifteen years”.