Latest open source hydro software
Worldwide over 7.600 members use the open source software of Deltares related to water, subsurface and infrastructure. To share its knowledge and expertise about the use of this software the institute organizes the Deltares Software Days USA in San Francisco.

International scientists and consultants will attend the DSD-USA, to improve their modeling skills in the field of water, subsurface and infrastructure.

The event is open for all users and developers of the Deltares software. 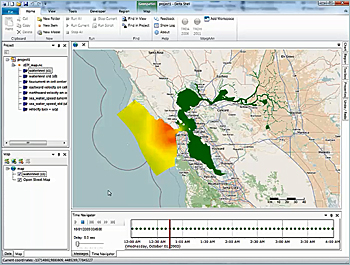 Largest earth sciences conference
The AGU is the world's largest conference in the field of earth sciences. This event is held yearly, in San Francisco, and is attended by more than 30,000 scientists, policymakers, teachers and students, who meet to share pioneering research.

This year, the AGU is being held from December 15 until December 20.

Several experts of Deltares will be present and will chair sessions and give (poster) presentations.

Furthermore, Deltares will also give hands on demonstrations in the booth at the AGU (booth number 2119), such as: Delft-FEWS, Delft3D Flexible Mesh, modelling the escape from Alcatraz with 3Di, eco-innovation, levee analysis and much more.