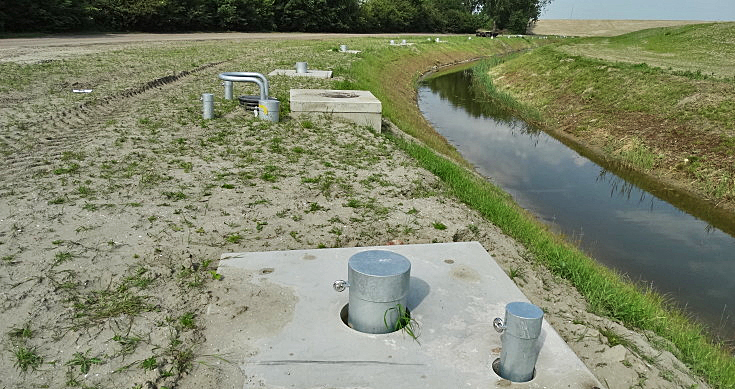 The system protects groundwater reserves from salinisation due to sea-level rise and over-exploitation.

Deltares is now looking for a suitable oceanic island to install and test the seepage system.

Calculations indicate that the system can not only protect highly vulnerable freshwater lenses on small oceanic islands, but even enlarge them. 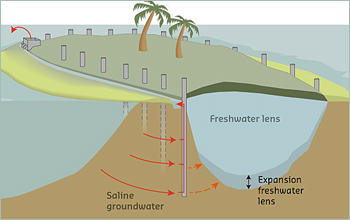 Protection of a freshwater lens underneath a small island, suing SeepCat.

The main purpose of SeepCat is to catch the excess saline groundwater – the amount of which will increase as sea levels rise – that flows towards the freshwater lenses.

Once caught, the saline groundwater is collected in small watercourses and returned to the sea.

Field tests in the Netherlands
An operational seepage system has already been tested on the south-western coast of the Netherlands for a year (on top photo).

This region underwent an instantaneous sea-level rise of no less than 1.5 meters when former agricultural land was turned into a ‘new’ tidal area.

Despite their tradition of protecting land from the waters, the Dutch are now opening up levees to restore natural tidal marshlands.

So farmers near the restored tidal area wanted to protect their fresh groundwater resources, which are vital for crop irrigation and which are expected to be reduced by the local sea-level rise.

SeepCat was installed to stop the underground encroachment of saline groundwater and the resulting shrinkage of the freshwater lenses. 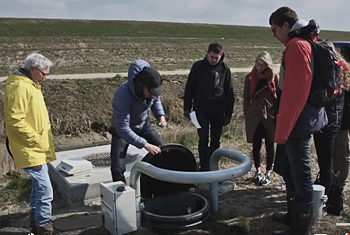 Field tests in the Netherlands with 61 vertical seepage tubes that have been drilled down 17 metres.

Compensation salt intrusion
By the end of 2015, test results had shown that SeepCat was functioning well enough to compensate for the effects of the local sea-level rise induced by the new tidal inlet.

Indeed, the seepage system can actually enlarge the freshwater lens by reducing groundwater pressure further when there is a rainfall surplus.

Most of them are situated no more than a few meters above the mean sea level, which means that fresh groundwater resources will be seriously threatened in the coming decades.

Any long-term solution for the protection of freshwater lenses on these islands from salinisation will probably involve a combination of tools to safeguard a sustainable freshwater supply in the future.

Testing the innovation on an oceanic island threatened by sea-level rise and adapting the seepage system to the local situation is a first and important step.

Perry de Louw: "We are ready to work with one of the smaller islands in the Pacific or Caribbean as soon as possible. Now it is the time to act."

SeepCat protects and increases the fresh water lens in Perkpolder (NL) that is used for local farming.