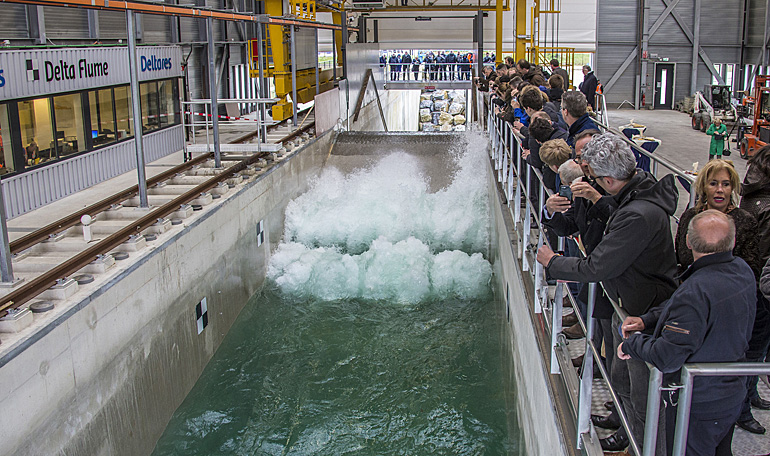 Research institute Deltares conducts a series of test in its new Delta Flume on the smart shaped Hillblock revetment block. The Delta Flume allows Deltares to generate waves up to 5 meter and simulate a superstorm.

Hillblocks are designed to function as one and create water channels in the hollow space underneath the top layer.

This allows the levee revetment to absorb the wave energy and reduce the run up, generating 30 upto 50 percent wave abatement. 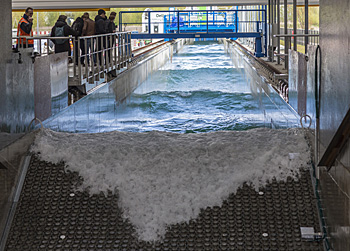 The stability of the Grassblock is tested on the dry side of the levees to withstand overtopping..

Large-scale study
The Hillblock was developed by entrepreneur Hans Hill. He wants to use the tests to determine how stable the Hillblock will be when it is subjected to severe wave impacts.

The Delta Flume can generate waves of up to 5 metres high, the largest artificial waves in the world. The large scale means that this study can produce a reliable impression of how the Hillblock behaves as a levee revetment.

Hillblocks have already been applied at some places along the Dutch coastline and Deltares wants to further investigate its stability under severe wave conditions, especially in relation to overtopping.

The series of tests is to provide more insight for more efficient - less high - levee designs. 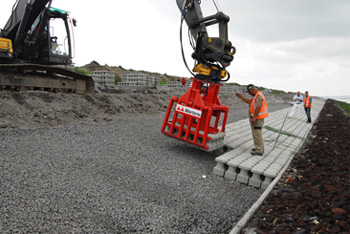 Hillblocks have already been applied at several locations on levees along the Dutch coast.

Smarter levee design
Paul van Steeg, a researcher at research institute Deltares, says that the initial results are promising and that the Hillblock is stable when subjected to relatively severe wave loads.

"In the current study, we are looking at the strength of the Hillblocks", continues Van Steeg. "In a similar study last year, we looked at how this placed block can reduce the amount of water flowing over the crest of a levee. That is very important in terms of levee design because it may make it possible to build lower levees. The Hillblock has a synthetic roughness and so the amount of water overtopping the dike was considerably reduced".

Less concrete needed
Entrepreneur Hans Hill is satisfied with the results so far. "The Hillblocks in this test were only 18 centimetres thick but they could still cope with waves higher than 3 metres, comparable with a superstorm."

According to Hill his block is so strong that less concrete is needed. "That cuts costs and carbon emissions. In addition, it reduces the amount of water overtopping the dike and so the Hillblock is a very appealing alternative to traditional levee revetment materials". 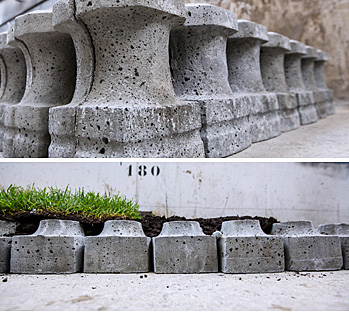 The Hillblock (top) showing the open space for the water channels, and the Grassblock (below) with an earth layer and grass.

More resistance to overtopping
Hillblock's latest block models, the Drainageblock and Grassblock, are also tested to withstand the monster waves of the Delta Flume.

This Grassblock is specially designed to be applied on the top of a levee, both on the primary or dry side. It is a topless block for the stability with a earth layer permitting the growth of grass.

Severe storms will wash away the turf and at that point the Grassblock will be exposed and act as the revetment. Hans Hill: "This block makes it possible to build a strong levee with a green natural look. The levee can be much lower without compromising on safety."

The Drainage Block is used to pave roads and provide drainage.

About the Hillblock
The Hillblock is a concrete placed block with an ingenious shape. When the blocks are placed alongside one another, a network of channels is formed below the top of the blocks. It is thought that this mitigates the impact of the breaking wave, resulting in an very stable revetment.
(photos: Thierry Schut)