The flood channel is one of 30 projects of the national flood protection programme Room for the River and is designed - in case of extreme discharges - to lower the level on the river IJssel by 71 cm. 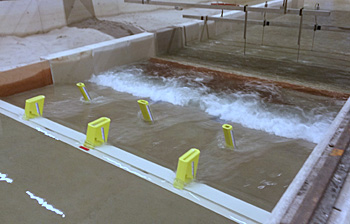 The 1:10 scale model in Deltares' Atlantic Basin. The rotatable boards are down and the upheld water streams into the flood channel. Initially the flow causes a turbulent hydraulic jump that is stablized in the stilling basin. The yellow objects are the piers of a road bridge that will cross the channel.

The consortium has been obliged to do scale model testing to show that the inlet work is well dimensioned and can handle the required 1145 m3/s to flow into the channel.

Research institute Deltares has built a 1:10 scale model of the planned inlet work and started the first discharge tests recently.

Project manager Judith van Os from Deltares: "The scale model study can be used to in detail simulate structures in the channel such as the dike and the bridge piers. This gives us a more precise idea than computer models of how much water can actually pass over the inlet and the exact velocity of the water." 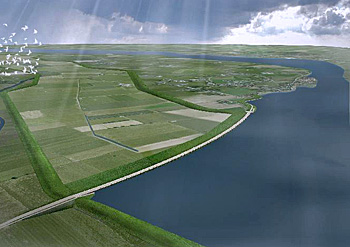 Artist's impression of the 800 m wide inlet (white line on foreground) when the water level on the IJssel river (right) is rising but not yet high enough to let down the rotatable boards. The flood channel (left) is still dry.

Agriculture land use
Under normal conditions the flood channel is used by meadowland farmers. In the decision making and design phase of the project the local farmers were involved as stakeholders and it was agreed that the flood channel would be used as little as possible.

Subsequently the inlet work consite of 60 adjustable openings. In normal upward position 1,05 m high rotatable boards withhold the river water to flow into the flood channel so farmers can continue their daily business. Only in case of an extremely high water level, the boards will be lowered and allow the river water to stream into the flood channel.

The inlet work has been designed on the probability this will happen only once every 100 years.

The difference in water levels will create a hydraulic jump. The scale model tests allow a more detailed study of the behaviour of this jump.

Location of stilling basin
The flow velocity and the turbulence of the hydraulic jump causes erosion and - without protection - will damage the grass surface in the flood channel and possibly influence the stability of the inlet. To prevent this from happening, a stilling basin has been planned. This is a deepened area just after the inlet work that will reduce the velocity of the flow and fix the location of the hydraulic jump.

One of the objectives of the scale model test for Deltares is to optimize the dimensions and the location of this stilling basin.

Also read on this website
● Boskalis contracted for Dutch Room for the River project at Veessen-Wapenveld, the Netherlands, 4 July 2013

Room for the river programme
Utrecht, the Netherlands
+31 88 797 2900
www.ruimtevoorderivier.nl/english

Explanation of the functioning of the planned flood channel Veessen-Wapenveld, by-passing the river IJssel, the Netherlands.