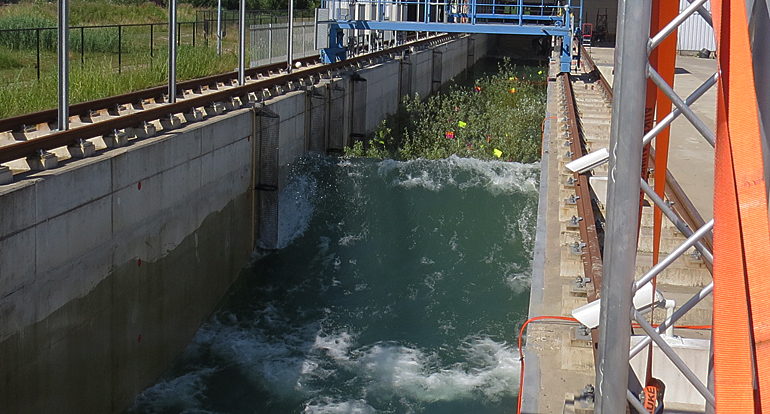 World’s largest wave flume has been planted with 32 pollard willow trees. Dutch-based research institute Deltares has started testing the dampening effect of the trees on waves. In the coming days the real sized trees will be battered with huge waves up to 4 meters. Deltares will measure the run up of the remaining waves at the end of the flume, indicating the dampening by the willow trees. 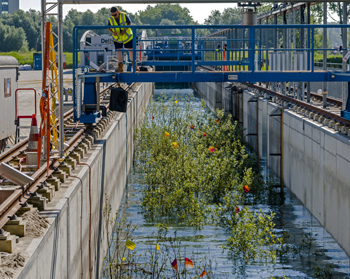 By measuring the remaining wave height after passing the willows, Deltares can collect data on the dampening effect.

Small wood of willows in flume
A lot of claims are made worldwide about the role nature can play in combating floods, typhoons and tsunamis. However, no sound research has ever been conducted into the effect of nature on extreme conditions of this kind.

How well do trees break the waves? Can the trees themselves withstand the forces involved? Nobody really knows.

Which is why researchers from research institute Deltares have built a wood of pollar willows. This specie is very common in the Dutch landscape and is expected to grow well if planted on the slope of a levee.

Natural mitigation of flood risks
Ecologist and coastal expert Bregje van Wesenbeeck at Deltares: ‘You can’t always just go around building dikes. In this study, we will be looking at how we can use systems already present naturally to mitigate flood risks.´

According to Van Wesenbeeck there is a lot of demand around the world for new innovative solutions for flood risk management. ´Particularly against the backdrop of climate change and the growth of the global population.’

Van Weesenbeeck remarks that the testing of the willows in the Delta Flume is very liking to be followed by a similar testing of mangrove trees.

There is a general notion that mangrove forests can provide flood protecion but according to Van Weesenbeeck little data is available on the real dampening effects. 'For coastal engineering and dimensioning of such forests, we shall need a better understanding of the wave dampening', she added. 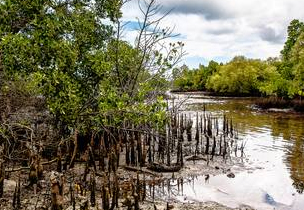 Deltares considers a similar test on mangrove trees that have a very different profile.

With and without leaves
The Delta Flume is 300 metres long, 5 metres wide, and 7.5 - 9 metres deep. Wave heights of up to 4 metres can be generated, making it possible to test the effect of waves on vegetation at full scale and to improve models for extreme wave conditions.

Several types of test will be carried out: one test series with willows with leaves, one without leaves, a test series with thinned crowns and a test series without trees. In this way, the study can determine the role played by leaves, branches and trees. The trial will run for a total of twelve days, followed by the data analysis phase.

The aim is to conduct a trial with real mangroves next year.

Crowdfunding
In addition to Deltares, TU Delft, NIOZ, Boskalis, Van Oord, Rijkswaterstaat, the World Wildlife Fund and VP Delta are closely involved in this study. There is still a shortfall of 50,000 euros for this project.

The general public is also being asked to contribute through a crowfunding campaign so that all the necessary analyses can be completed: www.woodsversuswaves.com.

Deltares researcher Bregje van Wesenbeeck reporting from the Delta Flume just before the waves rolled in.