A Dutch delegation, led by the Dutch province of Zuid-Holland visited the Taolinkou reservoir in China in May to prepare a project on hydrological forecasting and reservoir optimization of the reservoir.

On the occasion an contract signing took place by the Dutch province of Zuid-Holland and the Chinese Hebei province, to formally mark the launch of the project. 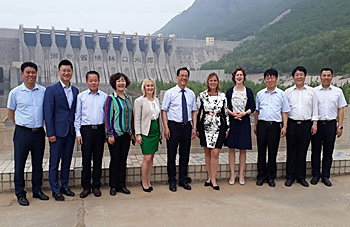 Dutch delegation visting the reservoir together with their Chinese colleagues.

First model results
During a meeting Dutch and Chinese experts looked back on the steps taken before reaching an agreement. They are looking forward to a successful project and cooperation. Deltares showed the first model results of the hydrological model (WFlow) using open data.

Several Deltares software apllications will be applied to the project, such as WFlow, RTC-Tools and Delft-FEWS.

It is the first reservoir management study in China that Deltares is leading.

The main purpose of the reservoir is to provide drinking water for Qinhuangdao City, to provide agricultural irrigation water for the middle and lower catchments of the Luan River, and to undertake flood control tasks for the small and medium size floods downstream.