Is it a dream of young engineers or will it be the future? Large floating living areas on inner waters or even off the coast? Whatever the answer, fact is that the workshop on floating cities during the conference Deltas in times of climate change in Rotterdam on 25 September, captured the imagination of the 'delta thinkers'.

Especially the existing floating school in the slum neighbourhood of Makoko in Lagos, Nigeria, as illustrated by Kunlé Adeyemi (top photo) of NLE Architects, shows that new floatable concepts is no longer about nice ideas but about reality. 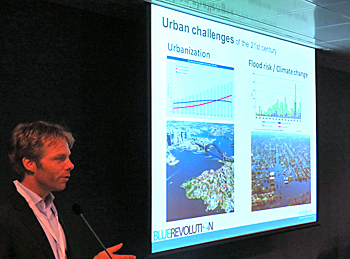 Bart Roeffen explaining that the predicted growth of the world's population and economic development, implies that the world needs more land to live and produce food as big as the whole continent of North America.

Self-supporting cities
In a way, floating cities already exist in the shape of gigantic cruise ships that sail the oceans today, as was pointed out by Bart Roeffen of the Dutch Blue revolution foundation.

Roeffen told that his foundation is conducting more precise studies on, for instance, the amounts of available waste that can be expected to be available for seafarming, and on how much algae can be made available for the production of biofuels.

At the same time his foundation is preparing a number of pilots in old harbours of Rotterdam to gain operational experiences producing food and bio-fuel from wasted nutrients and CO2.

New floatable nations
Lasse Birk Olesen of the Seasteading Institute challenged the imagination even further, talking about floating cities as new nations that can ‘lift their anchor’ and move to any location in the world.

According to Olesen such a city can adopt its own laws when staying in international waters.

Yet, he envisioned to start the first ocean-based floating city in close relation with an existing nation. He mentioned the relation between Hong Kong and China as a good example. “Later the relation can loosen and the floating cities can become real independent nations.”

Inner waters
Reactions from the audience suggested not to start on the ocean but on inner waters, making the technical construction less complicated.

Another advantage being the shorter distances for the residents to existing onshore facilities.

The construction of large floating cities on inner waters may lead to resistance, it was noted. Especially from real estate owners on the land-side of the waterfront who fear deprivation of their asset.

More than the technical aspects, the social aspects of the floatable concept were mentioned. The question was raised whether people want to live in such an isolated environment.

Go ahead in London
The concept of a floating city has already been adopted by the city of London, reported Mark van Ommen of consultancy firm Floatbase. In July of this year the mayor of London announced the start of the construction of a floating village at London’s Royal Docks.

According to Van Ommen the village will gradually expand, starting with a floating visitor's centre. 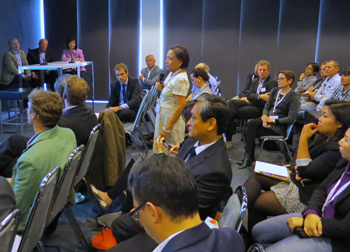 Participating in the workshop was Philippine senator Cynthia Villar who noted that the concept of floatable homes is totally new for the Philippines and cannot be introduced over night.

Small scale projects in slums
Professor Rick Heikoop of Rotterdam University of applied science looked at a more small scale application of the floatable concept. He proposed the idea to build self-supporting floatable houses for the 80.000 people in Manila that are vulnerable to flooding.

Heikoop showed pictures of the ramshackle homes in coastal cities that often stand in the water. "These homes can easily be replaced by new, low cost, floating homes", Heikoop suggested.

Again not the technical issues were discussed but the social. It was noted that the Indonesian capital of Jakarta has a resettlement scheme to move people out of flood prone areas. Although these people are offered a new home, they are reluctant to move to a new place.