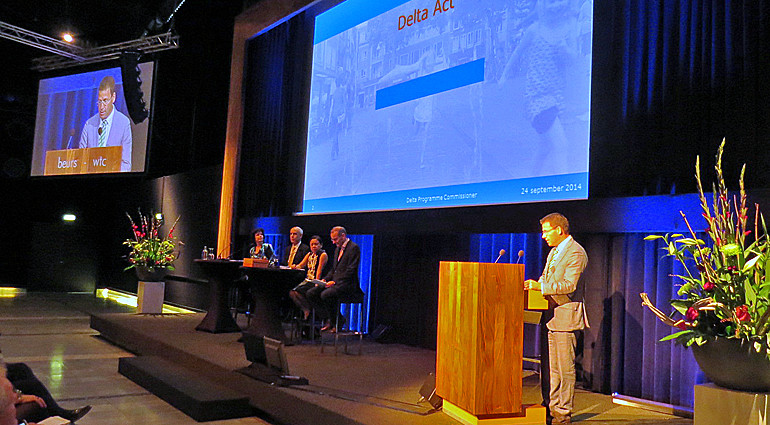 “The Dutch flood defence policy is no longer solely about building more storm surge barriers and higher embankments”, said Bart Parmet, staff member Dutch Delta Programme Commissioner at the opening plenary of the second conference Deltas in Time of Climate Change in Rotterdam on 24 September. “There are little concrete constructions in our new Delta programme and we are shifting to more nature-based flood defences”.

Only one week ago the Dutch government officially announced the second national Delta Programme that will now be debated in parliament the coming months. The national programme to make the Dutch water system more resilient to climate change, envisions the investment of 20 billion euros for the next 20 years. 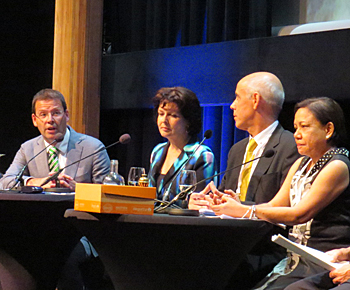 Three structural elements
“All river deltas are different so our new Dutch programme is no blue print for other delta regions,” Parmet added. “However, our new programme contains three elements that may be considered general for dealing with the complex issues in low-lying densely populated river deltas. “We have identified the importance of multi-governance, joint fact finding and adaptive strategic delta management. This is what we now call the Dutch delta approach”.

Parmet elaborated on the difficulty of adaptive delta management. “It is about continuous decision making on substantial investments with impact for large regions for many decades. This requires a long term perspective associated with many uncertainties. This requires an adaptive approach”, Parmet added. 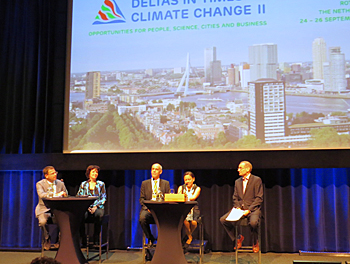 Cheaper nature-based solution
That the situation in the Dutch river delta differs from other deltas was made clear by Cynthia Villar, senator of the Philippines. She pointed out that her country does not have the money for a comprehensive expensive climate adaptation plan.

Senator Villar believes that cheaper nature-based measures are more appropriate in the Philippines. As an example she mentioned the restoration of mangrove forests along the coastlines as flood protection.

Delta thinkers
In her opening speech Dutch minister Melanie Schultz van Haegen of Infrastructure and the Environment called upon ‘delta thinkers’ to be more upfront in climate adaptation. “We need innovative city planners, architects who know about climate-proof construction, and researchers who can calculate how many green roofs and water plazas we need in big cities. What we need is a worldwide coalition of 'delta thinkers'.

Minister Schultz pointed out that too often solutions are less optimal because decisions are made on short notice following a disaster. “The worst response is to invest only in repairs. But all too often this is what happens. It is understandable. There's only a year to go until the next storm season. But to avoid this short-term reflex, we need to take action before disaster strikes.”