Deltas 2014: Highlights of an inspiring river delta conference in pictures

More than 1.200 participants from over 50 countries attended the second edition of the conference Deltas in time of climate change.

The conference took place in Rotterdam, the Netherlands from 24 - 26 September.

In three high-level round table discussions, over 100 sessions and many practical workshops, delegates from river deltas all over the world shared their experiences on the complex issue of sustainable delta management.

The conference addressed the growing need for river deltas and coastal cities to take preventive measures for protection against extreme weather events and sea level rise.

During three inspiring days the delegates talked much about developing strategies for climate adaptation, incorporating issues as economic development, nature conservation  and urbanisation.

Some of the highlights captured in pictures: 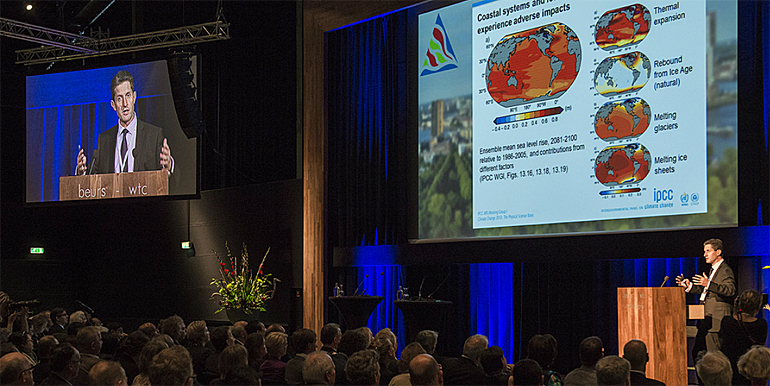 Professor Miles Allen of University of Oxford updates the audience on the state of affairs in climate science.
Climate change makes a bad day worse, he cited an American bush firefighter. Allen remarked that the sea level rise will not be the same everywhere. Around the North Pole the level is expected to drop. The biggest sea level rise is foreseen for the East coast of the USA. 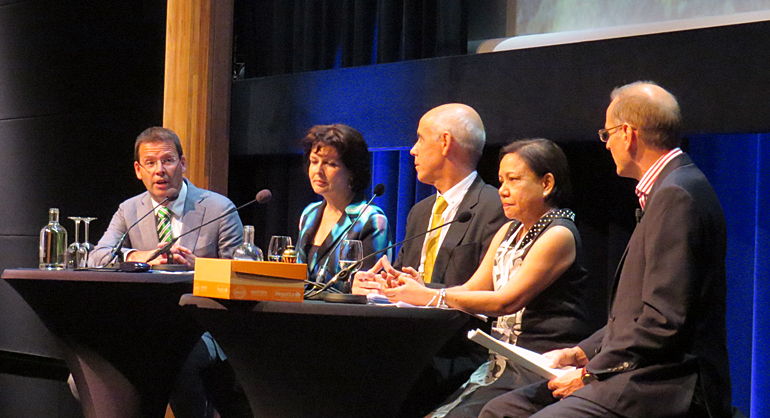 Director Bart Parmet (left) of the Dutch Delta Commissioner's staff goes in depth on the Dutch delta approach with three key elements: multi-governance, joint fact finding and adaptive delta management.
According to Parmet the Netherlands explores the possibilities of nature based flood defense systems. Philippine senator Cynthia Villar (second right) states that nature-based systems are the only option for her country as it does not have the money to build dikes and dams.

Hands on in design charrette 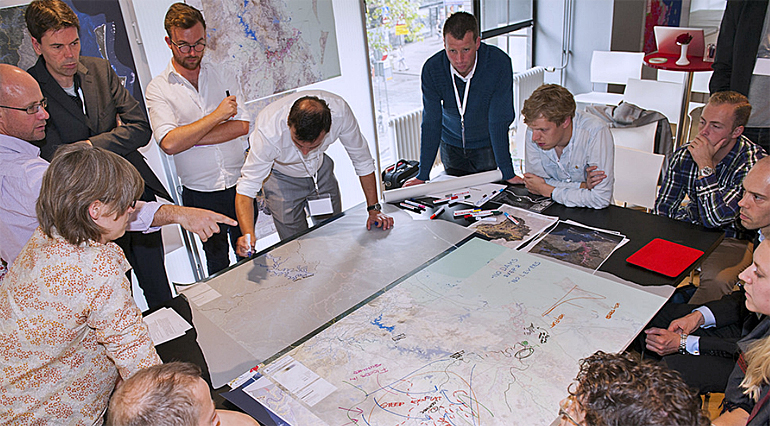 Stijn Koole of Bosch Slabbers kicks off the design charrette for the Brisbane watershed.
It proved difficult to design a watershed that is subject to both extreme floodings and drought. Everybody agreed on the complexity of the situation but there was no consensus on a good solution. 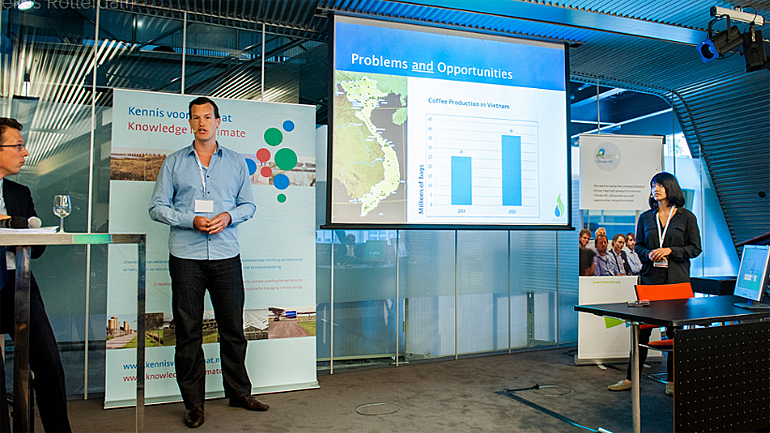 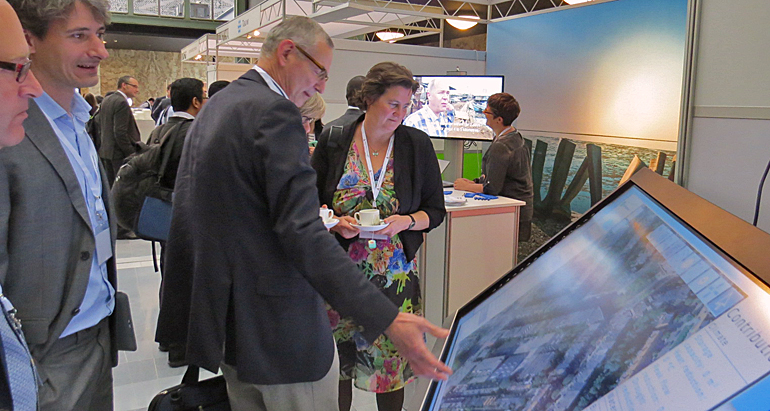 Research institute Deltares shows a touch table at their booth to visualise the effects of a flooding and the effects of potential measures for risk reduction.

If mayors ruled the world

Deputy mayor Raisa Banfield (middle) of Panama City states in a round table discussion with five (five) mayors and one senator that it is absolutely vital for adaptation plans to include economic development.
Cities can take leadership on climate adaptation if their national government fails to respond. However cities lack the funds for expensive infrastructural projects. Introduction of a local tax was opted, but vice mayor Cedric Grant of New Orleans remarked that his city was prohibited doing so by the federal government. 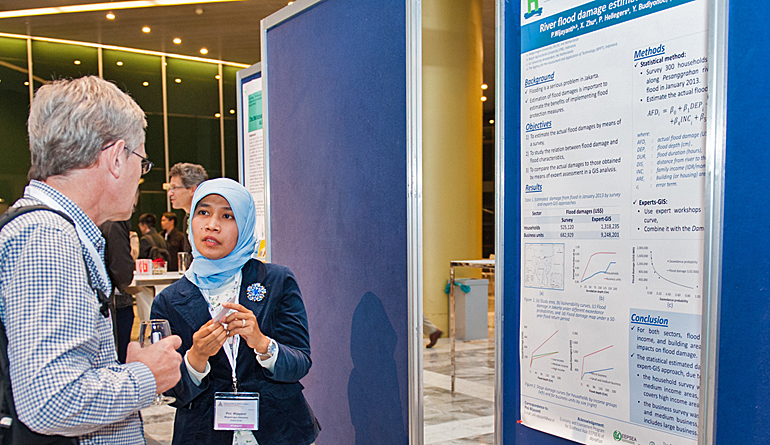 Msc Piuni Wijayanti of Wageningen University explains how she was able to estimate the damage of a flood in Jakarta in January 2013.
Over 100 posters were presented by young scientists on subjects as flood risk management, fresh water management, coastal systems, urban adaptation, governance and decision support tools. The winning poster was from Ana Genua Olmedo of the Spanish institute of agriculture and food research for her presentation on modelling the impact of sea level rise on deltaic rice fields.

It takes 12 preconditions for a delta approach 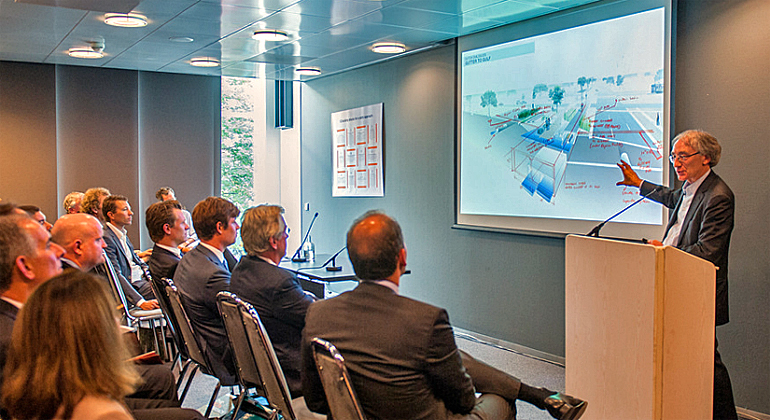 Architect David Waggonner from New Orleans collects pictures of modern urban water sensitive designs in other cities. He uses these pictures to inspire him to integrate landscape design and water management in his city.
Waggonner spoke at one of the eight sessions devoted to specific river deltas. The current status of these deltas was presented according to 12 'building blocks' that are considered crucial for sustainable delta management. The concept with the preconditional building blocks, the Delta Approach, was launched during the conference. 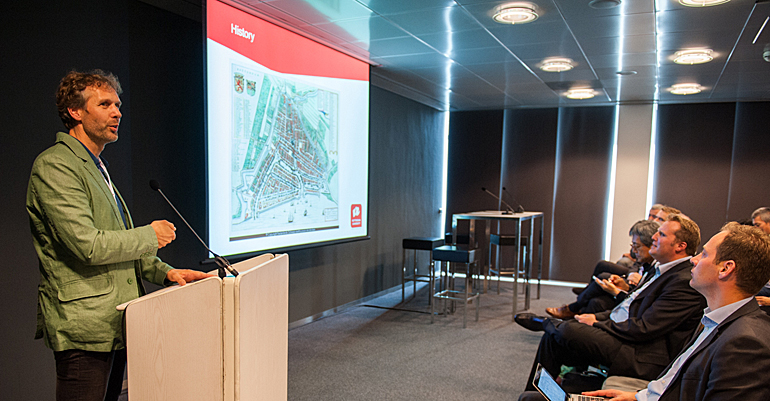 Bart Roeffen of the Blue Revolution Foundation envisions a large floating city just off the coast. For its food, energy and water supply the city can be self-sufficient. Is it a dream or a new perspective? The returning question during the workshop was about the willingness of people to live on the sea. 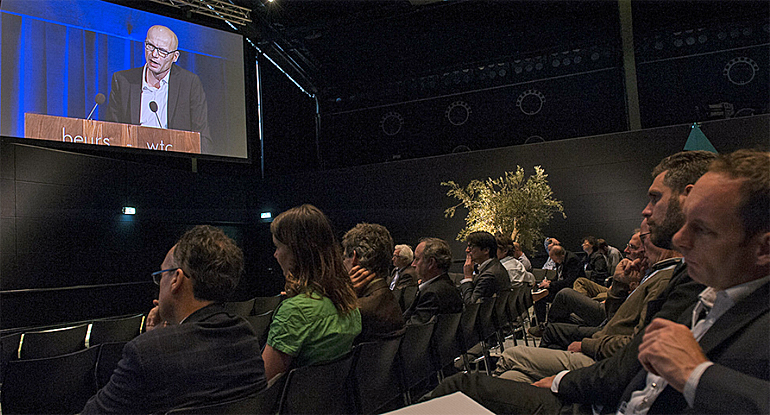 Climate change is too slow for politicians to handle, quotes Henk Ovink in the closing plenary.
Ovink works for the Dutch government but is detached to the Hurricane Sandy Rebuilding Task Force in Washington. Ovink was the driving force behind the Rebuild by Design competition that led to new innovative concepts to make the Sandy-hit region more resilient. "Resilience is about bouncing back better", he said.

Video impression of the first day of the conference