Deltas 2014: Launch of 12 building blocks for a sustainable delta approach 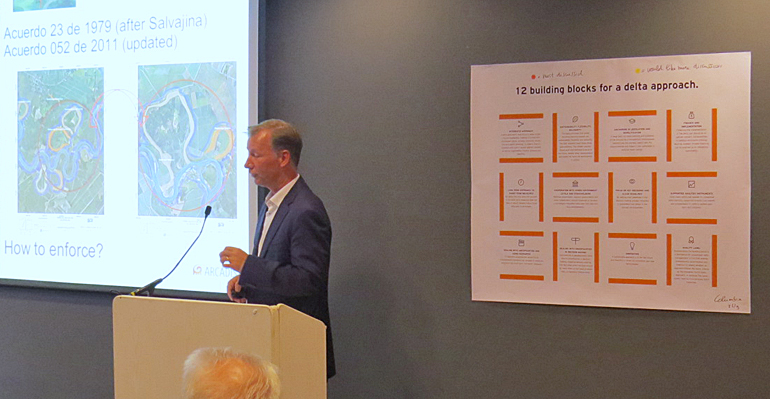 One of the best attended tracks of the International conference Deltas in Times of Climate Change II were the Delta sessions that focused on the current status and future development of river deltas in Indonesia, Vietnam, Bangladesh, Mozambique, Myanmar, USA, Colombia, Egypt and the Netherlands.

Eight cases were presented according to a framework of 12 'building blocks' , a set of preconditions that, as a whole, enables sustainable delta management in a river delta.

In the Delta session on Colombia Klaas de Groot (top photo) of Arcadis presented the Room for the River concept for the Cauca river.

This framework, the Delta Approach, was launched at the conference that took place in Rotterdam, the Netherlands from 24-26 September. 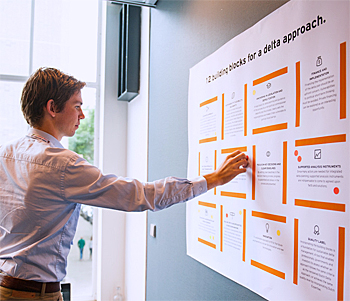 Input from river deltas all over the world
The Delta Approach with its 12 building blocks supports a strategic planning process for delta development that integrates sustainability, institutional, physical and social economic aspects. It is an integrated water management planning approach.

The framework is based on the experiences by the Dutch government gained from many bilateral delta projects worldwide.

Over the past five years the Dutch government, in close support with the Netherlands Water Partnership, has developed long-term water partnerships with governments in several river delta areas, such as the Vistula (Poland), the Mekong (Vietnam), the Ganges/ Brahmaputra (Bangladesh), the Ayeyarwaddy (Myanmar), the Ciliwung (Indonesia),  the Incomati (Mozambique) , the Nile (Egypt) and the Mississippi (USA).

In order to analyse all the different developments in these river deltas, it was decide to develop this simplified generic Delta approach toolbox.

Many different approaches
"It is a kind of a checklist to structure the complex process to develop sustainable delta management",  Peter van den Horn of the Netherlands Water Partnership explains. Van den Horn is closely involved in many of the Dutch partnerships with other river deltas and the development of the framework.

"We noticed that every government has its own approach. Bangladesh and Vietnam started a planning process for an overall climate adaptation programme. Other countries or cities reacted more directly to a flood disaster and started off with, for instance, the improvement of their  flood safety regulation. In this sense, it is not necessary that all building blocks are in place at the same time", Van den Horn adds. 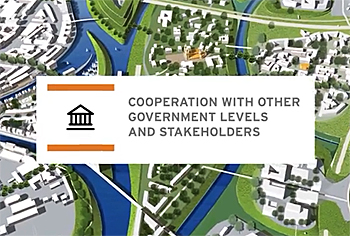 Less technical, more creativity
Van den Horn noticed that during the nine sessions the precondition on stakeholder engagement received much attention. "For a plan to get off the ground, it is important to have a shared vision and consensus amongst stakeholders. The sessions proved delta management involves many stakeholders, not only the many different governmental agencies, but also companies and communities."

According to Van den Horn there was consensus on the fact that it is crucial to have them all on board.

Another thing that Van den Horn struck during the sessions was the importance of creativity. "It is not only about technical solutions. It is also about creativity, for instance from city developers. In the USA session architect David Waggonner from New Orleans told he collected pictures of modern urban water sensitive designs in other cities. He uses these pictures as an inspiration for new urban landscape designs in his own city." 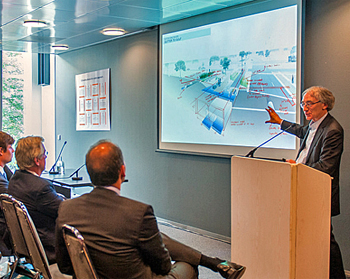 Long term perspective
According to independent advisor  Ben Lamoree the framework connects the short term daily work with a long term perspective. Like Van der Horn, Lamoree has also been involved in many of the Dutch bilateral delta projects.

"The management of river deltas tends to focus on the short term implementation of measures. The 12 building blocks can be a reminder of the long term perspective. One can check whether important aspects are missing from the general planning process", according to Lamoree.

During the sessions he noticed the importance of the integration of water management and spatial planning.

"Delta management is not constrained to only water projects. In the case of Mozambique the expansion of Beira city was discussed. As a long term strategy it is logical to expand the city away from the flood prone areas. But if you need to plan new social housing in existing flood prone areas, you can build them on elevated grounds", Lamoree concludes.

New call for research proposals
In addition to the nine specific Delta Sessions, two sessions were devoted to the Dutch research programme ‘Urbanising Deltas of the World (UDW)’.

This programme by the Netherlands Organisation for Scientific Research (NWO), aims to increase knowledge about river deltas worldwide and to contribute to water safety, food security, and to sustainable economic development in these areas.

During one of the sessions NWO presented a second call for proposals that closes on 3 November.

Video presentation of the building blocks for a delta approach