"Coastal cities in developing countries are growing rapidly and they asre the ones that can benefit the most from our new floating technologies", says Bart Roeffen in an interview with BBC-reporter Anna Holligan.

Deltasync conducts much research on infrastructures beyond the scale of floatable homes. As Roeffen explains in the interview his company wants to scale up the floating concept from individual homes, to city districts, and finally to completely floatable cities at sea.

See BBC News interview: Should we build new cities at sea?
with Bart Roeffen from DeltaSync at the Floating Pavilion in Rotterdam and the floating homes in Delft.

Self-supporting cities at sea
Roeffen is driven to innovate construction industry in terms of production and sustainable development. He believes the floatable concept can change vulnerable consuming cities into resilient cites that produce their own energy, food and water.

According to him self-supporting cities at sea address the complicated interrelated global challenge to meet the growing demand for food, energy and fresh water. 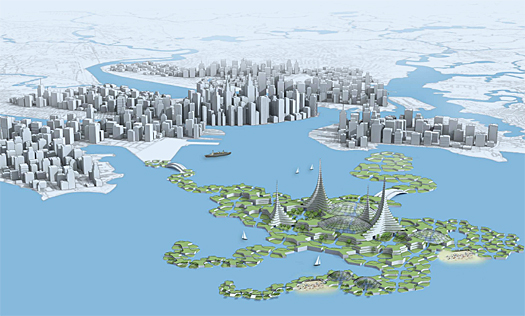