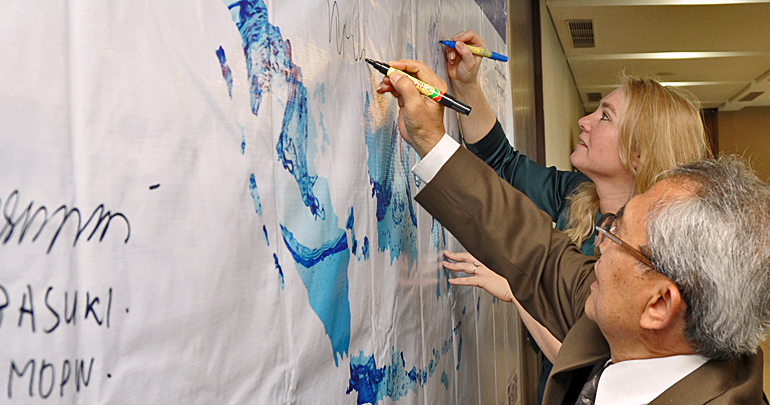 The document gives an assessment of the financial, technical and social-economic feasibility of the plan, both for the short and long term flood protection of Jakarta. This includes the construction of a seawall at Jakarta Bay, in combination with land reclamation for development of new industrial and housing areas.

The total estimated cost is 24.7 billion US dollars.

In the presence of Dutch minister Schultz van Haegen (background) and Indonesian minister of public Works, Djoko Kirmanto (foreground), the details of the NCICD master plan were discussed at an international business forum on coastal development.

Both the Indonesian government and the Jakarta city authorities reacted positively on the detailed master plan. 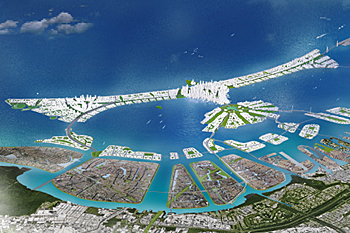 Garuda-shaped urban development
In November last year Dutch minister Mark Rutte launched the idea of such a combined flood protection-land development plan that was presented in the form of Indonesia's national symbol, the Great Garuda.

The past few months Dutch and Indonesian experts have been working on the details of this plan, involving a Dutch consortium headed by consultancy firms Grontmij, Witteveen+Bos with subconsultants Dutch research centre Deltares, architecture firm KuiperCompagnons and consultancy firm Ecorys.

The final version of the master plan is expected this summer.

Land subsidence and population growth
Jakarta is facing significant challenges. The rate of land subsidence is some 15 cm per year, due to groundwater extractions, and an increasingly larger section of the city is below sea level. Heavy rainfall combined with years of overdue maintenance on flood defences increases the possibility of flooding. Increasing urbanisation is putting enormous pressure on the drinking water supply.

"In Jakarta, the speed at which spatial planning and water management must be adapted to the growing population and economy is unparalleled. I am proud to present this plan to protect Jakarta here today. I have every faith in the cooperation between our two countries", minister Schultz said at the presentation. 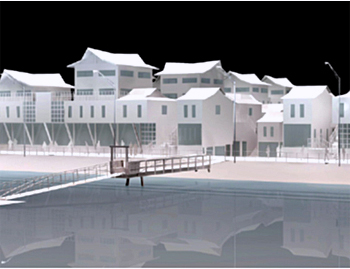 Strengthening of the existing sea defences
combined with redevelopment of the slum
district on the existing dyke.
(illustration: KuiperCompagnons)

Highly ambitious plan
In 2008, Indonesia called on the Netherlands to assist in protecting Jakarta from high water. Indonesian and Dutch experts from the public and private sectors and research institutions worked on the Master Plan for National Capital Integrated Coastal Development (NCICD) for six years.

Minister Schultz called the plan highly ambitious: "It is on schedule, in line with the desire of the Indonesian government, to speed up the project."

Water safety and water quality
The draft master plan not only offers an integrated solution for water safety but also for other problems in the city, including water quality. Only 2% of the whole of Jakarta is connected to a sewer system, and much waste is simply dumped into the rivers. Experts have joined forces to lay down a viable strategy aimed at massively improving the quality of the water in the short term, in such a way that it can serve as a new source of drinking water for the city, in the future.

Trade mission
From 30 March to 4 April, Minister Schultz van Haegen of Infrastructure and the Environment is leading a trade mission to Jakarta and Surabaya. Eighteen Dutch companies and organisations from the water and port sectors are accompanying the minister.

They hope to contribute further to the new hydraulic engineering and port development projects in Indonesia.

This news item is based on the press release from the Dutch ministry of Infrastructure and environment and Grontmij.