"Extremely well documented and with great expertise", with these words Rob Steijn of consultancy firm Arcadis complimented his colleague civil engineers in Myanmar. "They did a remarkable job, restoring the levees in the Ayeyarwady river delta so quickly".

Steijn was leader of the Dutch Risk Reduction (DRR) team of six flood experts that visited Myanmar from 31 August till 6 September.

Following the extreme rainfall and subsequent floods late July and early August, the Myanmar government requested the Dutch Government for an expert judgement on improvement of their flood protection system. 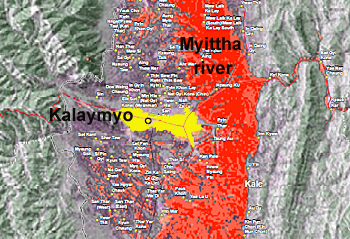 The city of Kalaymyo (yellow) with its 400.000 inhabitants escaped from a major flood by the Myittha river. This satellite image shows the flooded areas (red) of the river on 29 July (source: UNDSAT).

Two specific locations
The DRR-team had been asked to assess two specific situations.

One around the city of Kalaymyo where the heavy rain rapidly flooded the plains of the nearby Myittha river with water up to 7 meter.

The team was also requested to investigate undermined levees and shortcut channels in meanders of the rivers and streams in the Ayeyarwady river delta.

The Dutch DRR-team spend almost all their time out in the field, together with their Myanmar colleagues, visiting weak spots in the flood defence system. 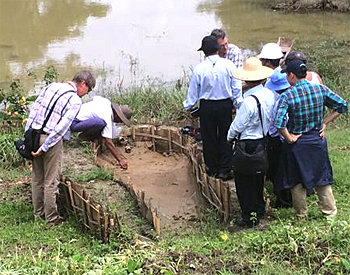 Inspection of a sediment well at the tow of a levee that had been stopped with a bamboo construction.

Hard job in stopping sediment wells
Upon return in the Netherlands, Steijn told that because the Myanmar colleagues were so well informed, it had been easy for the DRR-team to get a good overview.

"It soon became clear to us that sediment wells caused by seepage and piping had created a number of critical situations along the levees in the delta ", explained Steijn. "The high waters on the rivers had caused seepage through the levees and at some locations this led to piping with sediment wells on the land side . We were shown how these wells are effectively stopped by building a box-shape construction with bamboo and sand bags."

Steijn continued: "However the situation in August had been so extreme that there were more leakages and piping than what could be managed by the trained field workers. In some cases this led to situations where the piping was not effectively stopped".

Although large areas in the river delta were flooded, no breaching of levees occurred. 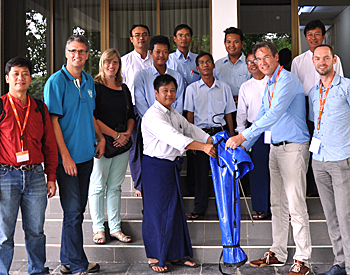 On departure of the DRR-team, Rob Steijn handed over the 'prikstok' that had been used for inspection of the levees.

New word in Myanmar language
The DRR-team also provided some on-spot training on inspection methods, river dynamics and ways to prioritize improvement measures. The training included the use of a 'prikstok'.

"Dutch levee inspectors often apply such a metal pole that they stick in the ground to discover holes in the subsoil", the team leader explained.

"Our Myanmar colleagues had no experience with this stick, but after some training by our team member Theo Reuzenaar, they experienced how easy they could get very relevant information about the status of their levees."

It was jointly decided that 'prikstok' would be a new word in the Myanmar language, added Steijn.

More risk-based approach
The DRR team was informed about plans to raise the dikes with some 1,5 m. According to Steijn the DRR-team and their counterparts discussed how to rationalize such a choice. "In the Netherlands we developed a new method to value flood safety in terms of potential economic damage and casualties. Our flood defence system is in accordance with the value that is protected."

"We talked about such a risk-based approach for Myanmar and showed how it can be used to prioritize measures within a limited budget, or to convince decision makers that flood safety is not merely a cost", Steijn concluded.

Follow-up actions
In the next weeks, the report of this first DDR-mission to Myanmar will be finalized. Depending on choices yet to be made, follow-up activities can be initiated.

The work carried out under the DRR facility is fully aligned with other cooperation initiatives between the Netherlands and Myanmar. So future activities will be aligned with other capacity building programmes from other countries or international organisations such as UN or World Bank.