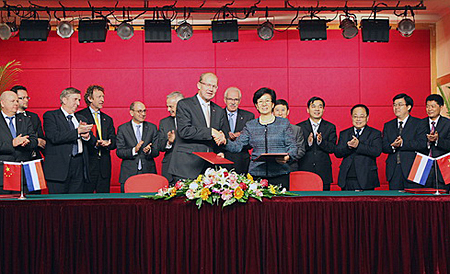 Rijkswaterstaat and the Huaihe Water Resource Commission started a three year cooperation programme. This is one of the major elements of a memorandum of understanding (MOU) signed by the Chinese vice minister Zhuo Ying of Water Resources and the Dutch state secretary Joop Atsma of Infrastructure and Environment. The MOU was signed in Beijing on 16 November.

New flood protection plans
By exchanging experiences on river basin management and using the same methods, both authorities can learn a lot from each other. "Knowledge on the Huaihe river can be of great importance in making plans for the protection of the areas along the Rhine`, said State Secretary Atsma on the occasion of the signing.

Other elements of the MOU include a similar information exchange programmes between Rijkswaterstaat and the Pearl River water resources commission and the Taihu basin authority.

Densely populated and flood prone lowlands
The basins of the Rhine and the Huaihe resemble each other. The water from the mountains in both rivers is quickly transported to a densely populated lowlands that is prone to floods. Rijkswaterstaat can extend its knowhow about the Rhine with data and experiences of the Huaihe. China can learn from the Rhine river basin management systems used by Rijkswaterstaat. 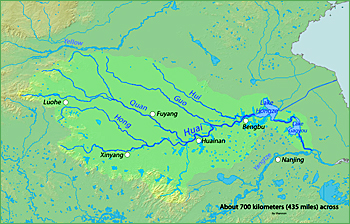 By the knowledge gained, the scenarios that worked for the Rhine accurate. Rijkswaterstaat and Huaihe Commission go a cooperation for three years. Close to the Dutch side also knowledge Institute Deltares and the international water education-UNESCO-IHE Institute with the cooperation.

Visit to the Huaihe
State Secretary Atsma visited the flood defenses of the city of Bengdu in the catchment area of the Huaihe river. The Huaihe has a large number of locks and weirs. At extremely high tide the water is transported to one of the 25 water retention areas. 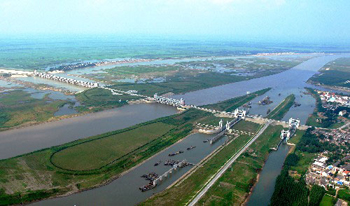