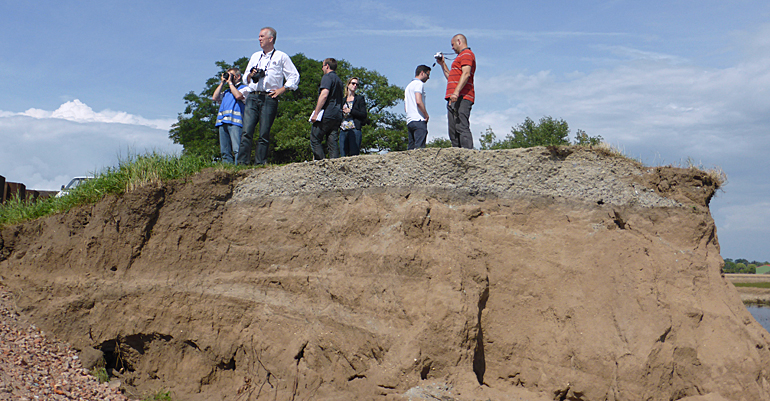 A group of Dutch and German dike experts conducted a post-flood field investigation in the areas around the cities of Dresden and Magdeburg where severe  floods occurred along the Elbe river early June.

The Elbe river had reached record heights after days of extreme rainfall in Central Europe. At several locations the river overtopped the dikes and at some  locations dikes breached.

Insight in dike failures
The group included experts from the Technical Universities of Delft and Dresden, as well as participants from Rijkswaterstaat, ENW and STOWA. Their objective of the investigation was to gain insight in the dike failures and the effectiveness of emergency measures.

Large parts of the damages have been caused by dike breaches that occurred due to geotechnical failure mechanisms and overtopping and some of these sites have been visited. 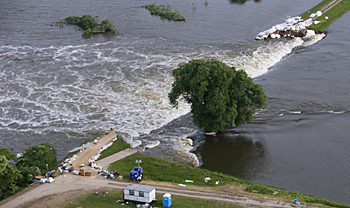 One of the locations visited by the experts was the 90-m-wide breach near Fishbeck.

Strength as important as height
"We were surprised to see breaches where the water level stopped rising a halve meter below the crest of the dike", told professor Bas Jonkman of Hydraulic Engineering at Delft University of Technology in a first reaction after the tour.

"It was not the height but the water pressure that caused the dike failure. When constructing a dike we pay much attention to the height, but here we learned again that its strength is as important as well."

Find an explanation for instability
Jonkman has been on similar field investigations after the floods in Japan (March 2011) and Thailand (November 2011) where he noticed similar breaches caused by instability.

"Nevertheless we were surprised as the dikes along the Elbe are constructed with heavy clay. This may need a closer look. If we are able to collect more data we may find an explanation when we run some calculations with our models", adds Jonkman. "It would be interesting to know what caused the instability at these specific locations."

Lessons learned
The Dutch dike experts will write a mission report with their findings. Just as was done after the visits to Thailand, Japan and New Orleans. Jonkman: "We will keep in contact with our German colleagues at the Technical University of Dresden regarding a next step."

The field inspections by Dutch dike experts started in 2006 with a first visit to New Orleans. By collecting data geotechnical levee failures, damages and loss of life datasets were analyzed. The insights in the failures of some of the levees due to piping and instability have resulted in more attention for these mechanisms in the Netherlands. 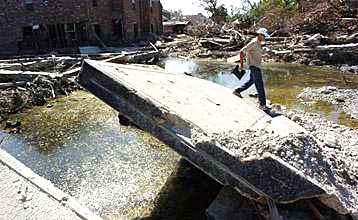 A post flood field inspection in New Orleans by the American Society of Civil Engineers with professor Jurjen Battjes of the Delft University of Technology revealed that the sheet piles to keep the flood walls in place were only 5 m deep, where they were assumed to be 15 m deep.

This news item is based on a release on the website of Delft University of Technology.

Read the reports on previous field inspections in New Orleans, Japan and Thailand.