Nine Dutch and Indonesian institutes agreed on a Joint Cooperation Programme for analysis of consistent data sets for water management in Indonesia.

The agreement was signed on 22 November in Jakarta. The signing ceremony was attended by Andi Eka Sakya, secretary general of Badan Meteorologi dan Geofisika (BMG) (on photo back left) and Lilianne Ploumen, Dutch minister for foreign trade and development co-operation (back right). 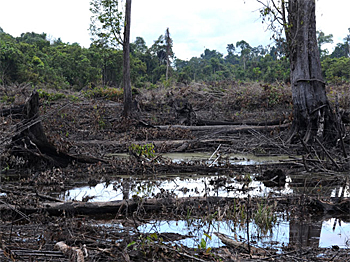 Working together on data and forecast systems
Indonesia has water management problems that include land subsidence, groundwater extraction, flooding and drought. Research institutes in the Netherlands and Indonesia plan to work together even more closely to develop solutions for the near future.

The aim of the agreement is to bring together Dutch and Indonesian partners throughout the sector of weather and climate data, water management and safety, spatial planning and applications in agriculture.

The JCP will focus on establishing access to, and analysing, consistent data sets for water management in Indonesia (hydrological, meteorological and climate-related), studying specific problem areas such as land subsidence and groundwater extraction (for Jakarta and other locations), drainage in peatland areas on Sumatra and Kalimantan, and climate change.

A forecast system for flooding and drought will also be developed.

The first phase of the JCP will include work on an operational forecasting system for flooding in Jakarta, climate series for Jakarta and a drought information system.

This news item is based on presse releases on the websites of Deltares, Alterra, KNMI.