Matthieu de Schipper successfully presented and defended his PhD thesis and was awarded with a Doctoral degree at Delft University of Technology on 16 January. The thesis was based on his study 'Alongshore variability of nourished and natural beaches' on the impacts of beach nourishments.

For 3,5 years De Schipper rided a sonar equipped jetski, monitoring the sand movements following a beach nourishment along the Dutch coast near Vlugtenburg, just north of Hook of Holland.

De Schipper (top photo) found that - following the renourishment - the beach did not change abruptly but gradually.

Gradual effect on sand banks
Nearly monthly measurements showed the changing topography of the beach in detail. The results revealed that the first period just after implementation of the nourishment showed similar magnitudes of variability than the total period investigated, and no apparent effect of the nourishment shape on the variability could be discerned. 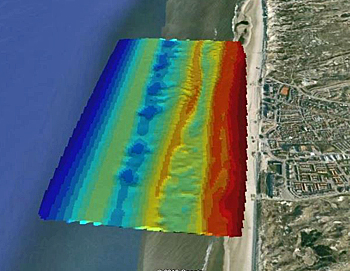 Influence of wave angles
De Schipper compared his soil movement data with available video images and wave data, with objective to investigate a relation between the impact of wave height, period, angle and frequency bandwidth of the incoming waves.

The results showed that the slow formation of variability, coincided with very oblique wave angles.

Different observations in USA and Australia
The variability of the sand banks following a renourishment on the Dutch coast, occurred more slowly than in observations at the US east coast (Duck, NC) or Australian east coast (Palm Beach, Gold Coast).

De Schipper studied the formation process of alongshore variability in more detail by examining field measurements of an Australian natural beach and using conceptual numerical modelling. Special attention herein is paid to the effect that different sea states (swell vs. wind sea) have upon flow circulation and the formation of topographic variability in the nearshore, to put the results in the thesis into the context of the Dutch wind sea wave climate.

Very low frequency flow velocity oscillations can be forced by variations in wave height and are related to transient rip currents. Analyses in the thesis show that these oscillations are typically small in the Dutch wave climate.

However, the steep profile of a nourished beach could enhance the magnitude of these motions, such that substantial fluctuations in current can be present at a Dutch nourished beach. 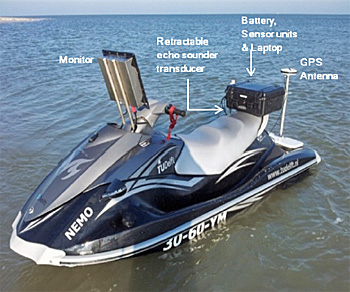 Flourishing company
De Schipper rides the jetski also on behalf of his company Shore Monitoring & Research, specialised in monitoring and researching morphological and hydrodynamic processes along the shore.

The five-year-old company is flourishing.

In the Netherlands the company is involved in monitoring the Sand Engine, an innovative and sustainable alternative to the traditional method of beach nourishment.

Worldwide bathymetric surveys have been conducted for Unesco-IHE on the coast of the Caribbean island of St. Maarten and for Ghana for the Ada Coastal Protection works on the coast of Ghana.

This news item is based on a press release published on the website of Delft University of Technology.

Marcel Stive, chief of the Department of Hydraulic Engineering explains the importance of the off shore monitoring of soil movements during the Sand Engine nourishment pilot. The video includes images of the jetski in action, monitoring the real disperion of the sand.