What are you looking for?
News 8 September 2013 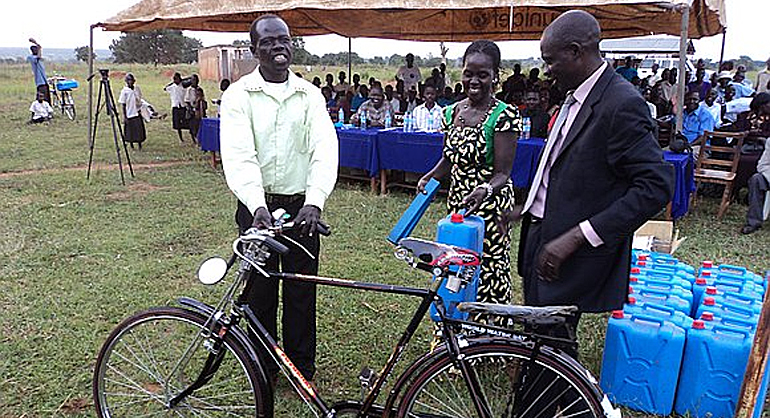 To address issues related to poor sanitation and hygiene in Orom Sub-county in Northern Uganda, district authorities and partners organized an annual sanitation day on 20 August.

The ceremony involved an inspection of the sanitary facilities in four villages, and prizes for the households with the best sanitation and hygiene facilities. At the end of the day winners were rewarded with different prizes including bicycles, soap and water containers (jerry-cans).

The competition was supported by Caritas Gulu and was part of the WASH campaigns organized in the Uganda communities by the Dutch Wash Alliance.

Community led total sanitation
The colourful ceremony was punctuated with songs and traditional dances from the local community and primary school students. It was well attended by district officials and community members.

Prior to the commemoration of the sanitation day, a team of Community Based Hygiene Promotion Volunteers were dispersed to mobilize the community on so-called Community Led Total Sanitation (CLTS). This is an integrated approach to achieve an Open Defecation Free (ODF) status.

CLTS enables the community to analyse their own sanitation profile, their practices of defecation and the consequences, leading to collective action to become ODF.  The efforts of the volunteers were key in mobilization of the community towards scaling up sanitation in the Sub-county.

Only functional latrine
Opio Thomas, 34 years old, works as a volunteer for the Village Health Team (VHT) managing Mbale Village. He joined the Sanitation day competition because of his prior training as a village drug distributor, which prompted him to lead by example. He attributed the low sanitation coverage in his village to inadequate access road, low levels of education and limited budgets for sanitation.

Opio Thomas mentioned that before the commemoration of sanitation day he was the only one with a functional latrine, which his neighbours would share, causing a burden on him. . .

He was very pleased with the bicycle and he said he will use the bicycle to fetch safe drinking water from a borehole that is 2 km away from his  homestead. He called upon government and partners to launch an aggressive campaign in Orom Sub-county so as to increase hygiene and sanitation coverage in the whole Sub-county. 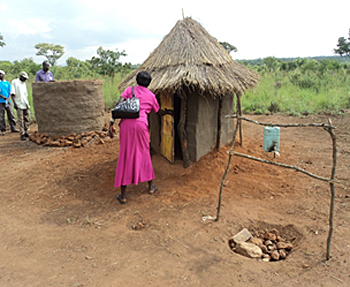 One of the 18 appointed women councilors of Orom Sub-county inspects the household latrine in Juba village.

Lowest access to water
Orom sub-county has the lowest access to water, sanitation and hygiene in Kitgum district: 16% Of the households have access to latrines; only 5% of the households have access to functional hand washing facilities and 26% to safe drinking water. Information and sensitization are very important to improve hygiene conditions and the organisation of an annual Sanitation Day has a positive effect on the community’s efforts to observe personal hygiene and keep their environment clean.

About Dutch Wash Alliance
The Dutch WASH Alliance (DWA) is a consortium of six Dutch NGOs working together towards a society in which everybody makes hygienic use of sustainable water and sanitation.

Participants are Simavi, Akvo, AMREF Flying Doctors, ICCO, RAIN and WASTE. The alliance intensifies their already ongoing cooperation and coordination in developing countries. It further increases the effectiveness of their programs and gives the partners the opportunity to learn from each other.

This news item is based on project information published on the website of Dutch Wash Alliance.