Dutch coast ‘superstorm’ proof for the next 50 years 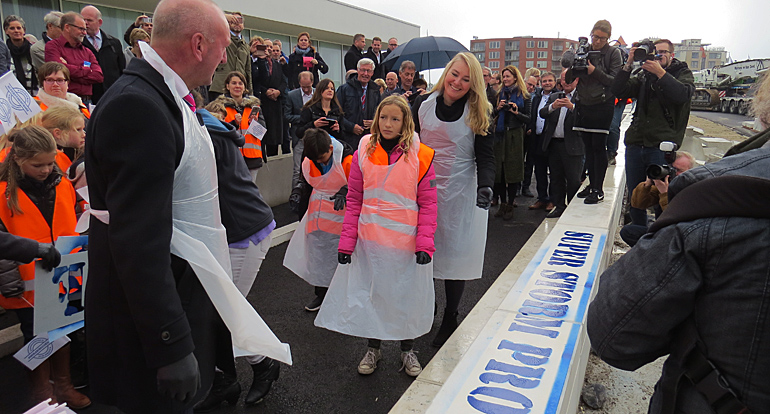 On the brand new marina grounds of the Dutch coastal town Cadzand, minister Melanie Schultz-van Haegen of Infrastructure and the Environment marked the completion of a 600 million coastal reinforcement programme.

Minister Schultz declared the Dutch coast ‘superstorm’ proof for the next 50 years.

The completion of the last out of nine coastal defence projects was celebrated in Cadzand, the Netherlands on 7 November. 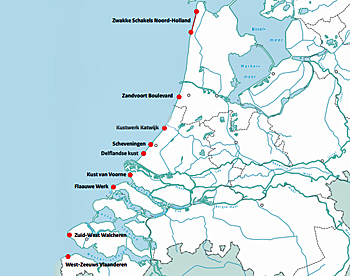 Map of the Dutch coast with the nine locations (red dots-lines) that have now all been reinforced.

Stronger waves
Stronger winds in the North Sea increase the energy of the waves that crush on the Dutch coast.

This finding was in 2003 reason to start the reinforcement of nine locations along the Dutch coast that were considered too weak to withstand such waves in case of an extreme storm.

According to Schultz the probability of a superstorm averages 1 percent in 100 years. “This does not seem much, but without proper protection the damages may run up to more than 100 billion euros. Furthermore, it would seriously disrupt society for years on end. It is important for us to be well prepared for violent storm”, she said.

“We have now tackled the last weak link and I am proud to present the results”, Schultz concluded. 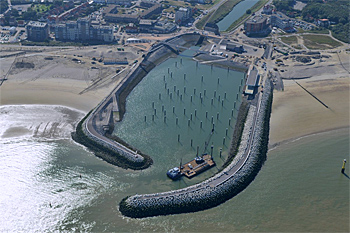 Aerial of the marina and its two longitudinal embankments under construction in Cadzand, the Netherlands.

Combining different objectives
Next to the increased flood protection, some of the coastal reinforcement projects gave a major economic and social impetus, such as modern designed water fronts, more beach, new wetlands and even a marina.

Schultz assured that it has not always been easy to combine the specifications of such multiple functions with the flood safety standards and the available budgets. “Of course the different parties pursued different objectives, but these coastal projects have proven that multiple objectives are not necessarily conflicting”.

Three objectives
In case of the last project in Cadzand three objectives were combined. The municipality capitalised on the coastal defence improvement to give the beach resort of Cadzand-Bad a considerable upgrade.

A public-private collaboration took the opportunity to construct a marina between the new longitudinal embankments. 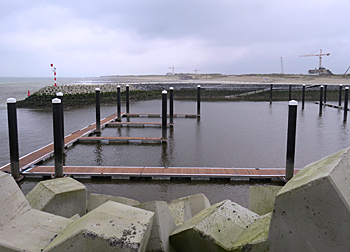 The marina with in front the Xbloc armour units.

Concrete armour
The embankments that protect the marina have been topped with Xblocs to break high waves.

Xbloc is an innovative concrete armour unit which has been developed by Dutch contractor BAM - under its trade name Delta Marine Consultants - for shore protection and breakwaters.

Xblocs have a high hydraulic stability and requires considerably less concrete compared to other armouring systems and furthermore the units can be placed faster.

This is the first time Xblocs have been used along the Dutch coast.

This news item was originally published on the website of the Dutch government and BAM Infra (Dutch only).

More information
Ministry of Infrastructure and environment
The Hague, the Netherlands
+31 77 465 67 67
www.government.nl/ministry-of-infrastructure-and-the-environment

Impression of the construction of one of the two new longitudinal embankments that now protect the new marina.