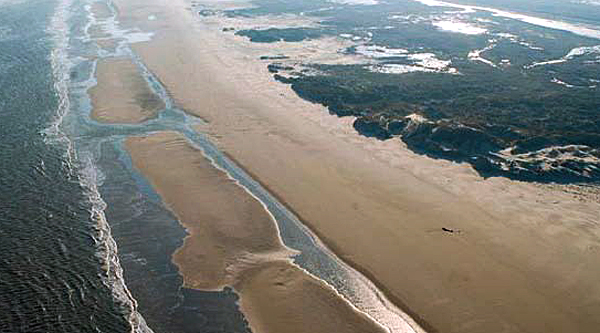 A multi-disciplinary consortium of Imares Wageningen UR, Deltares, Grontmij and Water Architect are conducting an international feasibility study to determine if Balance Island offers an effective solution to the salinisation of drinking water and agricultural land in the river deltas of Bangladesh and Vietnam.

The Balance Island is a concept to reduce coastal salt water intrusion by constructing offshore sand islands that creates a tidal area with brackish water.

Building with nature
Balance Island is an example of Building with Nature as it extends existing shallow coastal zones through sand suppletion. This creates a natural barrier that will channel salt water along pre-determined channels.

The key advantage is that it makes use of the delta’s own dynamics and strengthens the natural values, while at the same time offering solutions that make the delta area more inhabitable for people.

Meanwhile, the option is no longer relevant for the Haringvliet because a different solution was chosen. The creators however see potential for other deltas. 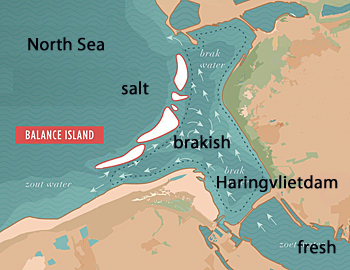 Bangladesh and Vietnam
An exploratory model study conducted together with Delft University of Technology, shows that such an island can offer an effective solution to reduce salt water intrusion. This is the reason to start a project to explore whether the concept is applicable in Vietnam or Bangladesh, two countries where the Netherlands has been closely involved in the approach of river delta issues.

During the preparation of the project, the Dutch embassies in these countries have responded positively. The project partners will carry out the study in close collaboration with existing initiatives, local research institutes and policy makers.

The study is funded by the Global Water program financed by the Dutch Ministries of Infrastructure and Environment, and Foreign Affairs.

Study in two phases
The project is divided into two phases. Until the summer, in a quick scan it is examined what generic factors affect the feasibility of the concept and what opportunities there are for the realization of Balance Island in Vietnam and Bangladesh. Thereafter, the feasibility of one of the two deltas will be worked out in more detail.

For the idea the initiators won both the Dutch Delta Water Award and the international Delta Alliance Young Professional Award.

Winner of Delta Award
Balance Island can support conservation efforts for (aquatic) fauna, flora and eco-systems in many river deltas around the world.

The concept is the winner of both the prestigious Dutch Delta Award (2012) and Delta Alliance Young Professionals Award (2012).

This news item was originally published on the websites of Grontmij and Imares (in Dutch only).

Also read on this website
● Delta Alliance Young Professionals Awarding ceremony at the Rio plus 20, 22 June 2012