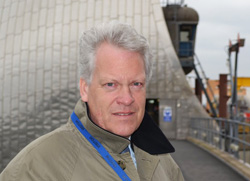 Delta Commissioner Kuijken will meet with state and national water management officials including the U.S. Army Corps of Engineers, members of Congress, think tanks and academics to exchange best practices and discuss the Dutch approach to water management.

Similar water related water challenges The historic flood levels experienced by states along the Mississippi River this spring were a reminder to the Dutch of the flooding in the Netherlands in the 1990’s when 250,000 people were evacuated and large tracts of farmland were flooded. While the United States and the Netherlands face similar water-related challenges such as sea level rise, salt water intrusion and subsidence, both countries also share a history of cooperation on water management issues. Most recently, Dutch water management specialists are working with Louisiana on designing a water management strategy for the state. In New York City, Rotterdam and Brooklyn officials are collaborating on a waterfront exchange project on urban flood protection.

New delta programme
Sixty percent of the Netherlands is at or below sea level and two-thirds of Dutch people live in flood-prone areas. As Delta Commissioner, Wim Kuijken is responsible for overseeing the annual Delta program and budget in the Netherlands to protect the land and its people. The Dutch government will unveil a new Delta program in September to further strengthen its defenses against flooding and protect the Netherlands’ supply of freshwater. By 2014, the Netherlands will face major decisions regarding its delta system including creating new safety standards for levees, improving methods to secure the freshwater supply and looking at ways cities build in the future.

Governemental cooperation at all levels
“The Netherlands and the United States are each other’s best allies in water-related challenges. Be it knowledge exchange, delegation visits or memorandums of agreement, our cooperation extends from the national to state level,” said Delta Commissioner Kuijken. “We share the same challenges and shared challenges require shared solutions.”

Visit to Florida
While in Florida on September 12th and 13th, Delta Commissioner Kuijken will focus on how the coastal state protects itself against sea level rise and salt water intrusion. As the United States is in the midst of hurricane season, the Delta Commissioner is keenly interested in how Florida prepares for and responds to weather emergencies. Delta Commissioner Kuijken will take a tour and meet with officials of the Miami-Dade Department of Emergency Management. He will also meet Melissa Meeker, Executive Director of the South Florida Water Management District and LTC Michael K. Kinard of the US Army Corps of Engineers. In Ft.Lauderdale, he will give a presentation at Florida Atlantic University with FAU’s School of Urban and Regional Planning followed by a Q&A discussion about collaborative, long-term sustainability efforts.

Visit to Washington, D.C.
In Washington on September 13th and 14th, the Delta Commissioner will meet with senators from the Gulf Coast states including Senator Mary Landrieu (LA) and the Congressional Waterways Caucus. He will meet with Steve Stockton, Chairman of the National Committee on Levee Safety, the American equivalent to the Dutch Delta Commission. Delta Commissioner Kuijken will join Resources for the Future for a discussion on “Making Room for the Rivers: Learning from the Dutch Approach”. He will also meet with officials from the United States Global Change Research Program.

Visit to New York City
In New York on September 15th and 16th, the Delta Commissioner will discuss how the Netherlands and New York are tackling flooding risks to urban areas. He will meet Amanda Burden, Chair of the City Planning Commission and Director of the Department of City Planning. The Netherlands and the Port Authority of New York and New Jersey are working on the Brooklyn Waterfront Rotterdam Exchange project to develop the South-West Brooklyn Waterfront using sustainable economic development, strengthened infrastructure and climate adaptation principles. Delta Commissioner Kuijken and members of Waterfront Vision 2020 and Chris Ward, Executive Director of the Port Authority of New York and New Jersey will take a boat trip along the Brooklyn Waterfront to Governors Island, an island first purchased by the Dutch in 1637.

This news item was originally published on the website of the:
Dutch Embassy in Washington DC.

Click here: VIDEO - Working on the delta
In this video (in English, 6.15 min, 15 mb) the Delta Programme is explained