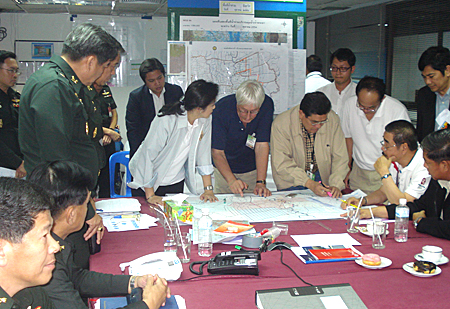 “Not re-active but pro-active, that’s the way we have assisted the Flood Relief Operations Center in Bangkok”, recall Adri Verwey and Tjitte Nauta of the research and specialist consultancy institute Deltares for coastal areas and river basins.

Initially the two Dutch flood experts were asked by chief of operations for evacuation and flood prevention, minister Plodprasop, to advise him and his staff only.

But as the flood crises intensified late October and Bangkok came under serious threat, more Thai authorities were involved. Verwey and Nauta saw their advisory role expanded to more ministries and other authorities such as the Royal Irrigation Department and the Bangkok Metropolitan Authority.

Both flood experts look back on a very successful mission...... 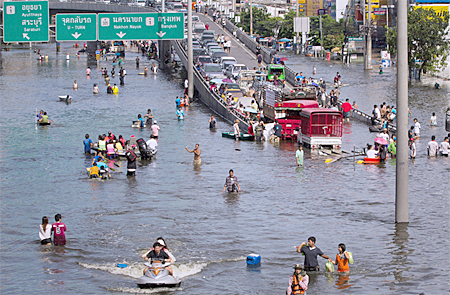 What has been your main role in the flood center?
“Right from the start we have worked with our Sobek hydrodynamic simulation model. It enabled us to predict the consequences of rising water levels around the city and possible dike breaches. The Sobek models had been used before in Thailand on earlier occasions of the floods.

By using this data we could show the people in the flood center what to expect as the water levels increased. The model produced maps that made the flooding very visual and allowed the disaster experts at the center to anticipate on possible events and talk about measures to prevent new floods to happen.

When we arrived in mid-October, the center was mainly busy reacting to the floodings that had occurred. Due to our presences they were also able to prevent more damage to happen.” 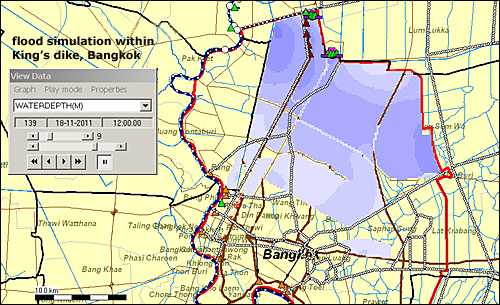 What else did you do?
“Once we had the Sobek simulation operational, we focused on the dike inspections. We went out and found several dike sections that were weakened by piping. Seepage water was coming underneath the dike and destabilized the foundation. Piping is known as a very serious threat, causing a dike breach.

At one location the piping was very severe and we made a simulation in our Sobek-model. We showed this to the people at the flood center. After a consultation with the prime minister Yingluck, 1000 soldiers were ordered to immediately enforce this dike with sand bags.”

“Our simulation also showed that at the north side of the town, the flood defenses were not high enough and by inspecting the place it was discovered that water was already flowing in. We advised the operation center in a plan for a 6 km long dike made of big bags filled with sand.

After the dike inspections we turned our attention to the pumping stations and advised on the most efficient use of the available pump capacity to keep the inner city of Bangkok as dry as possible. ” 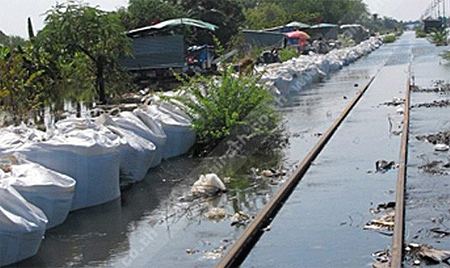 What do you advice the Thai government for preventing this to happen again?
“The Thai Government has some idea of the structural measures they need to take. They, however, should opt for an integrated water management plan that also includes the non-structural measures like institutional reform, flood forecasting and improved land use.

Such a plan should have a broader scope than flood related measures only and should include for instance urgent issues as coastal erosion and deteriorating water quality as well. The Thai government must make a clear choose between 'quick & dirty', following the usual ad hoc engineering approach, and a comprehensive long term approach.

Such a new approach would pave the way to a more safe and sustainable Thailand.”