A Dutch consortium by Royal HaskoningDHV, AGT and TechForce Innovations is to develop sustainable coastal protection solutions for Bhola Island, located at the mouth of the Meghna River and home to 1.7 million Bangladeshis.

International engineering and consultancy firm Royal HaskoningDHV - leading the consortium - initiated the project in close cooperation with the Bangladesh Water Development Board (BWDB).

Loss of land
Bhola Island is the largest island in the delta of Bangladesh and it has been ravaged by floods and cyclones for many years. Strong currents of the Meghna River, the world’s 3rd largest river, are continuously ‘eating’ away the island’s coastline.

"The erosion along the 130 km east coast of the island is devouring about 5-10 km2 of fertile land annually. Every year thousands of people lose their houses and their livelihoods as their land is swallowed by the Mighty Meghna River", said Mr Shahidur Rahman, Director General of the BWDB. "It is time to protect the people of Bhola against the loss of land and flooding." 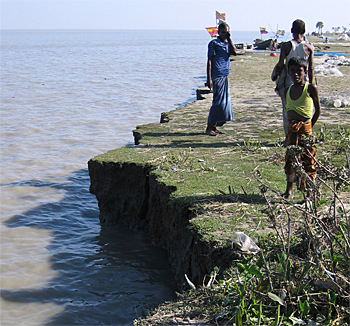 Erosion early warning system
An Erosion Early Warning System (EEWS) including underwater acoustic detection will detect faults and weak points in the underwater protection works in a very early stage and allow the responsible agencies to respond appropriately to strengthen them.

Mr Pieter-Christiaan van Oranje-Nassau, CEO of AGT Netherlands said: "The system will provide a good insight into how erosion takes place and is crucial in implementing the risk based design and strengthening strategy. It also allows the authorities to be better prepared. During site visits, we learned that the local authorities value these monitoring solutions because it allows them to make accurate decisions for cost effective maintenance."

The system will save the Bangladeshis millions of euros per year on repair and maintenance of the river bank protection works.

Selection most effective, urgently needed measures
Mr Jan Bron, Project Manager at Royal HaskoningDHV, said: "We are analysing the current bank protection measures on Bhola Island and their effectiveness and are selecting locations where bank protection is most urgently needed. The team is also preparing designs for protection works to be implemented to the tune of 40 million euro using improved construction methods and monitoring and erosion early warning systems ensuring the protection works will be sustainable."

The 1.3 million euro plan is being financed by the Dutch Government’s Facility for Infrastructure Development in developing countries (ORIO).

The plan will be ready in November 2014 after which approval the implementation and maintenance phases should follow. The financing of these phases is equally shared by the Dutch and the Bangladesh Governments. Each is expected to commit about 22 million euro.