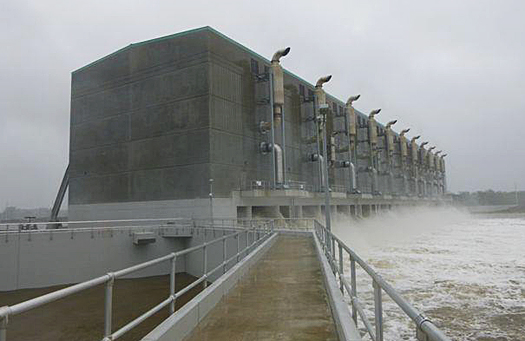 Not just Americans watched closely as the massive cyclone Isaac put the new flood protection systems of New Orleans to the test on August 28 and 29.

Dutch experts of engineering firms such as Arcadis, Royal Haskoning/DHV, Fugro and HKV Consultants were closely involved in the planning, designing and works to make New Orleans Flood Proof. When the officials announced that the systems held, cheers went up in the Netherlands as well.

Slow down to storm
Isaac pushed water over a levee on the outskirts of New Orleans and threatened to flood oil refineries and towns in the state and neighboring Mississippi. A Category 1 storm, Isaac had maximum sustained winds near 80 mph as it came ashore.

Improved flood protection system in place
The Dutch-based engineering firm Arcadis designed major portions of the low-lying city's revamped flood control systems. "We are very confident," said Dennis Kamber , a senior vice president with Arcadis US. "The system has been strengthened and improved."

The Army Corp of Engineers turned to Arcadis to inspect the damage and help it understand why control systems failed, said Dan Hitchings, who worked with the Army Corp at the time and later joined Arcadis.

Model test for storm tracks
Arcadis engineers in Colorado tested models for 150 storm tracks to see how the Hurricane and Storm Damage Risk Reduction System would hold up.

"That was part of the analysis the Corp had to do," Hitchings said. "How high do we build it?"

Shelters for workers on pump stations
The upgrades, which cost 14.9 billion dollar, are designed to handle surges that top flood walls and levees. Pump stations also have shelters that will allow workers to stay on site, something they couldn't do during Katrina, which contributed to flooding.

Arcadis US is a subsidiary of Arcadis, a Dutch firm that employs more than 21,000 people globally and is known for its expertise in flood control. The company has 6,000 U.S. workers, including about 350 at locations in Highlands Ranch, Cherry Creek, Lakewood and Boulder.

This item is based on a news release published by the Denver Post on August 29.
(Source photo: Facebook US Army Corps of Engineers, New Orleans district)