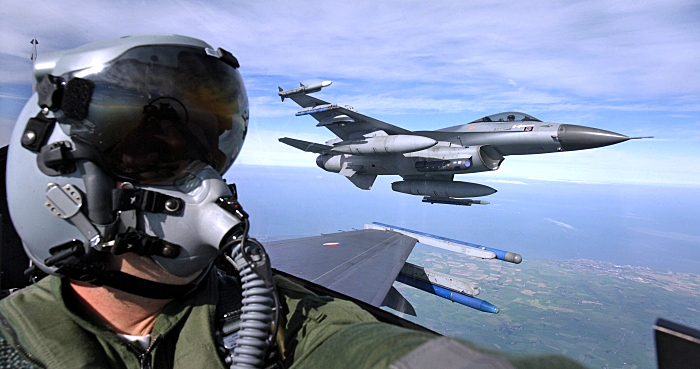 At the request of the regional water board Groot Salland, an F-16 fighter aircraft of the Royal Netherlands Air Force inspected the levees of the river Vecht on 4 June.

The F-16 was equipped with a RecceLite pod, using a photo camera to identify sand boils near levees as an indication of a potential piping failure. The photos were taken from 1,5 km altitude.

The flight was set up by the water board to practise the full procedure of calling in a reconnaissance fighter aircraft in case of an emergency. 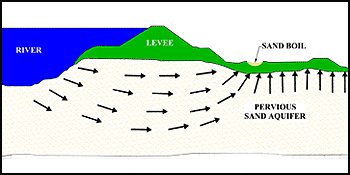 A sand boil indicates sand transportation that may be undermining a levee.

Indication of internal erosion
The images produced by the RecceLite will be handed over to the water board so levee inspectors can look for suspicious locations where sand is emerging at the surface. This can indicate piping, an internal erosion that can undermine the levee and evenutally cause a breach.

The advance of this kind of levee inspection is the quick assessment of several hundred kilometer of levee in all weather conditions.

Structural cooperation with air force
It was not the first time for a Dutch regional water board to call in an reconnaissance F-16. In 2011 and 2012 F-16s took infra-red images of levees too, but that were all emergency situations when levees were about to fail.

In this case the F-16 was called in during a normal situation along the river Vecht. This gave both air force and water board the opportunity to practise the whole procedure of contacting the air force, providing the necessary information for the flight route and learn to interpretate the images. 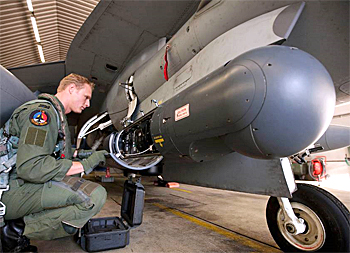 A RecceLite pod mounted underneath a Dutch F-16.

The pod simultaneously collects infra-red and visual images within a very wide range. It can operate both automatically according to the mission plan or manual.

The RecceLite also has a recording unit, with the ability to store 2,5 hours of continuous reconnaissance images.

This news item was originally published on the website of water board Groot Salland (in Dutch only).