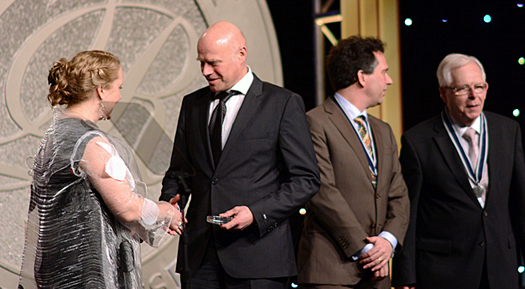 A team of Dutch organisations specialized on flood control, headed by the Dutch Delta Program Commissioner, won the 2013 Franz Edelman Award for Achievement in Operations Research and the Management Sciences in San Antonio on April 8.

Handing out of the Franz Edelman Award 2013 in San Antonio.

Deltares conducted for the project, the analysis and wrote the final report 'Social cost-benefit analysis 21st Century', which was completed in 2011. The theory, the mathematical model and the software were developed in conjunction with, and in accordance with instructions from, Deltares, by the Dutch Central Planning Office, the country's Ministry of Infrastructure and the Environment, Tilburg University, Delft University of Technology and HKV consultants.

More efficient spending of public funds
Delta Commissioner Wim Kuijken congratulates the team on winning this important, prestigious award. "Almost 60 percent of the Netherlands is vulnerable to flooding," he said. "The objective of the Dutch Delta Approach is not to respond to a flood disaster but to avoid it. This innovative project has contributed significantly to improved flood protection in the Netherlands while at the same time steering public funds in the most efficient way." 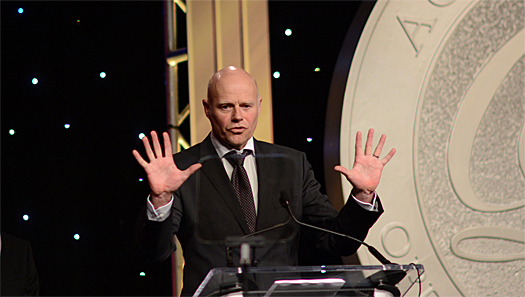 The Franz Edelman competition, now celebrating its 41st year, attests to the contributions of operations research and analytics in the profit and non-profit sectors. Since its inception in 1972, cumulative dollar benefits from Edelman finalist projects have reached $190 billion.

Protection against flooding is a vital issue in the Netherlands since 55% of this country is susceptible to flood risk. Each year the Dutch government spends roughly 1 billion euro on protection by dikes and dunes. In total there are 3,500 kilometers of primary dikes in the Netherlands.

Using operations research techniques, the team determined that it is efficient to limit increased standards to only three critical regions. These results, accepted as a basis for policy by the minister of Infrastructure and Environment, led to 7.8 billion euro less investment costs while strengthening the country's defense against the kind of devastation that cost massive damage in the United States during Hurricane Sandy and resulted in thousands of deaths in Holland during a major storm in the early 1950's.

About Informs
The Institute for Operations Research and the Management Sciences (Informs) is the leading professional association for professionals in advanced analytics.

Informs is an international scientific society with 10,000 members, including Nobel Prize laureates, dedicated to applying scientific methods to help improve decision-making, management, and operations. Further information about INFORMS, analytics, and operations research is at www.informs.org.

Deltacommissioner Wim Kuijken explains the importance of the new calculation method for flood protection in the Netherlands.

This news item was originally published on the website of Informs and Deltares.