On 18 January the Dutch government handed over 150 'prikstokken' to the Irrigation Department in Myanmar that is responsible for the inspection of levees.

Prikstok is a Dutch name for a stick that is a very effective tool for spotting weak sections in levees. The sticks were produced locally.

It is used by pricking in the ground of a levee and by feeling a difference in the soil resistance an invisible subsurface hole of breach can be detected.

The 'prikstok' was first used in Myanmar by the Dutch Disaster risk reduction (DRR) team in 2015 during their assessment work after cyclone Komen had caused the most severe flooding Myanmar experienced in decades. The word 'prikstok' is an official new word in the Burmese language. 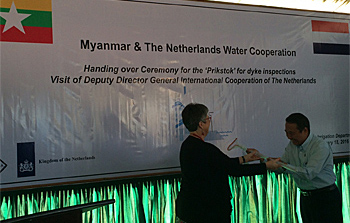 Aftermath of cyclone Komen
Myanmar and the Netherlands, both low-lying Deltas, share a long history of dealing with floods.

Already in May 2013 both countries decided to work hand in hand to share knowledge and experiences on how to manage the water, and control the floods.

In the aftermath of this flood disaster, caused by cyclone Komen in July 2015, the Dutch Government responded to the need for sustainable solutions for future floods and sent a Disaster Risk reduction team (DRR) to Myanmar. 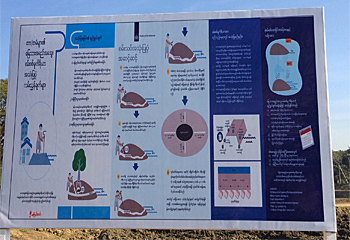 Instruction poster on how to use the prikstok.

First use of prikstok
The team provided advice on flood forecasting and early warning in the Kalay and Monywa area, on river modelling, management and inspection of levees by the use of the ‘prikstok’.

The stick that was developed centuries ago but still in use in the Netherlands, proofs to be very useful also in the inspection of the levees in Myanmar.

That is why the Netherlands handed over the first 150 locally produced ‘prikstokken’ so that Myanmar can better improve and inspect its levees.

In support of the use of the sticks, also a poster and a manual have been developed. 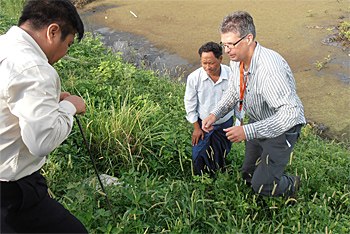 Use of the prikstok by a Myanmar official during the assessment of a levee by the DRR-Team in August 2015.

To meet such an urgent need with a swift response, a DRR-Team of high level experts can be fielded quickly.

For example, the selection and preparation of the DRR-team to departure from The Netherlands to Myanmar took only 5 days.

The DRR-Team does not focus on emergency relief, but on sustainable solutions for the country. Together with the government and local experts, the situation will be assessed and analyzed after which the team will come up with a set of recommendations.

More information
Embassy of the Netherlands in Myanmar
www.facebook.com/netherlandsmissionmyanmar