The Government of the Netherlands signed a grant agreement with the Government of Georgia on a project to rehabilitate the Zemo Samgori irrigation system. The Dutch government finances 860,000 euro for the development stage of the project.

The overall costs of the project Rehabilitation of Zemo Samgori Irrigation System, including development, implementation, operation and maintenance, will be 55 million euro. 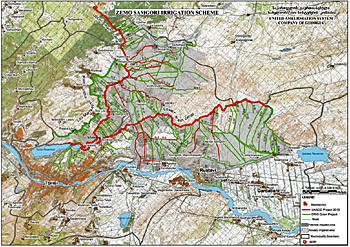 The Zemo Samgori irrigation system is located northeast of Tbilisi. In red the parts that have already been rehabilitated and in green the parts that will be upgraded.

Detailed design
Zemo Samgori is Georgia’s largest irrigation and drainage system with a total gravity irrigation network of more than 30,000 ha. The system is managed by the state company United Amelioration Systems Company of Georgia (UASCG).

The system receives water from the river Iori. Zemo Samgori has 82 km of main canals, and 236 km of secondary channels and 35 km of drainage collectors, mainly in the Lower Main Channel Area.

The objective of the rehabilitation project is to increase the participation of the economically active agricultural farmers in enhanced commercialization of the rural economy in Georgia.

It includes civil works, capacity building as well as an extension and awareness raising program. The development will start with the required studies and detailed design for the rehabilitation, which will be tendered in coming period. 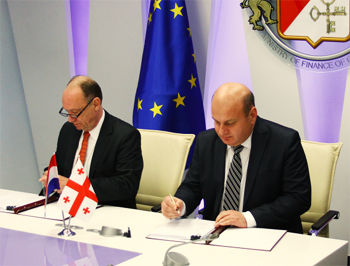 Fruitful cooperation
"These funds will be used for the preparatory works of the project. I wish to note that Dutch support is used to implement a lot of projects in our country. Agreement signed today is part of a fruitful cooperation and I believe that plenty of other projects will be implemented in this area", stated Otar Danelia, Minister of Agriculture of Georgia.

"I am pleased to sign this agreement with the Government of Georgia today. It is an important initiative for the development of agriculture in your country. Plenty of fertile land can increase the country’s agriculture production through proper irrigation. It may thus contribute to the increased GDP and economic growth. We have gained a good experience in this area in the Netherlands and believe that Georgia can have the same success for the sustainable economic development and improvement of living standards in rural areas", commented Hans Horbach, Ambassador of the Kingdom of Netherlands in Georgia.

This news item was originally published on the website of the Georgian Ministry of Finance and the Dutch embassy in Georgia.

More information
Embassy of the Kingdom of the Netherlands
Tbilisi, Georgia
+995 32 2276200
http://georgia.nlembassy.org