Dutch-Indonesian support for Javanese communities to restore their coast line

The agreement was signed in Demak, Java, Indonesia, on 10 October during a high level event organised by the Ministry of Marine Affairs and Fisheries (MMAF) of Indonesia and the Dutch-Indonesian public private consortium Building with Nature (BwN).

At the event the Dutch embassy in Indonesia and the Governor of Central Java handed over the so-called ‘Bio-rights’ contracts to 10 community groups in 9 villages within Demak district. 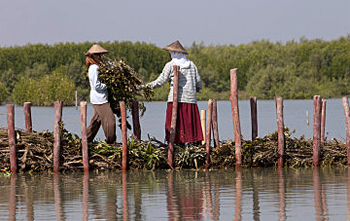 The first permeable dams have proven to be able to trap sediment.

Revitalizing fishing ponds
The signing of the village contracts is an important sign of commitment by the villagers. In return for their support, which may involve giving up their fish ponds at the shoreline, the project supports them in revitalizing aquaculture ponds inland and building up new livelihoods.

‘I was excited waiting for the support through the Bio-rights contract’, conveyed pak Musthofa, the Chair of Wedung community group, one of the signatories of the contract.

‘I realise that our community must work hard and collaborate to make sustain our environment through the measure’. 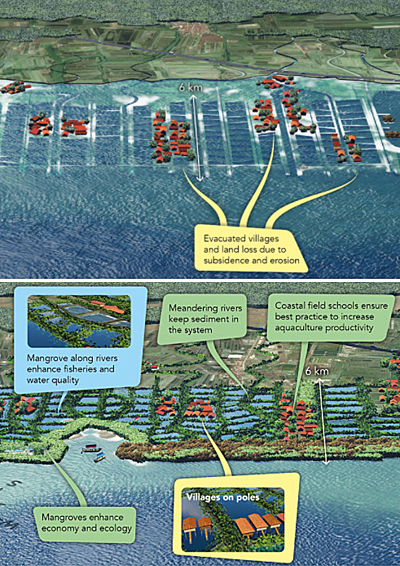 Erosion forced inhabitants to leave their villages (top) . By trapping the sediment again and restoring the mangroves, the coastline can be restored, including the fish ponds. Villages can be rebuild on poles (below).

The consortium has reported positive progress of their hybrid engineering measures constituting of permeable bamboo structures to halt erosion and allow for mangrove recovery over the past few years.

Good sedimentation rates were monitored in the first year resulting from the permeable structures in front of the coast that work as a sediment trap.

After consolidation of the sediment these rates may not be enough to compensate for subsidence in the project area.

The sinking of the coastal area in Demak needs to be urgently investigated because some first observations by the consortium showed they are as high as 8 cm per year.

More data has to be gathered and monitored to have all the facts at our disposal.

Radical decisions needed
Femke Tonneijck, programme manager of Wetlands International that is one of the partners in the consortium: ‘Radical decisions need to be made about the future of this area. A paradigm shift is needed, from addressing symptoms to addressing root causes at the landscape level. We hope that Demak can be saved and we do everything that we can through Building with Nature, which we believe is the best solution for this area.’ 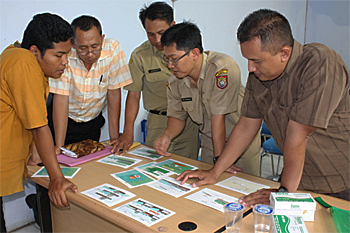 Indonesian authorities get familiar with the principles of Building with nature.

About Biorights
The Kyoto Treaty excludes the conservation of peat swamps from the system of carbon-credits for Co2-reduction measures.

However, peat swamps have accumulated vast amounts of carbon so it is important to preserve these carbon dioxide sink holes, or even expand them to allow the storage even more carbon dioxide.

By trading in ‘biorights’ it is possible to extend the system of carbo-credits to nature conservation, and in this case preserve the remaining peat swamps from being turned into vast palm oil plantations.

This news item was originally published on the website of Deltares, Wetlands International and Ecoshape.

3D sketch up of the sinking of coastal area in Demak at Java, Indonesia and the intended restoration.