The plant is located on the closure dam Afsluitdijk, the Netherlands, and produces electricity directly from the difference in salt concentration in the surface water on each side of the dam.

The pilot plant is operated by RedStack, the company that developed the technology based on reverse electro dialysis (RED), using special designed membranes. 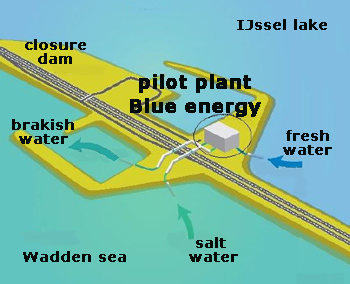 Technical feasibility
Theoretically, with 1m3/s river water and an equal amount of sea water approximately 1 MW of renewable electricity can be recovered.

The pilot plant on the Afsluitdijk is to produce 50 kW blue-energy per hour and will show the technical feasibility in real life conditions using fresh IJsselmeer water and salt water from the Wadden Sea.

Big potential energy source
At the current location on the closure dam Afsluitdijk, the potential production of blue-energy can be sufficient for the energy requirements of 500,000 households.

An exploration of suitable rivers in the world shows that there is a potential electricity production of 1,600 TWh annually.

Blue Energy has the advantage that it can be generated continually, contrary to solar and wind energy, which are both dependent on availability and the weather.

The expectation is that Blue Energy will succeed in generating energy for 8 eurocents per kilowatt-hour. 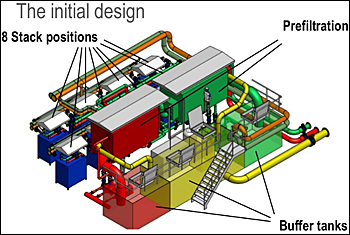 RED technology electricity has the advantage it can be generated directly from the membranes in one process step.

About RedStack
RedStack is a Dutch spin-off company from water technology research centre Wetsus and was founded in 2005. It's mission is to develop and commercialise reverse electro-dialysis (RED) and related technologies.

Video on the development of the reverse electro dialysis (RED) technology (2009).