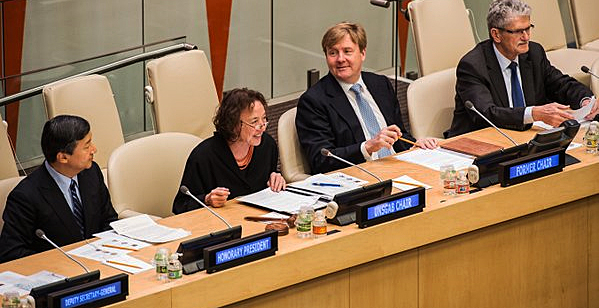 "Water and sanitation targets have been firmly embedded in the new sustainable development goals which will focus the efforts of the international community over the next fifteen years", said Dutch king Willem-Alexander on the closing ceremony of UN secretary general’s advisory board on water and sanitation (UNSGAB).

The ceremony took place on 20 November at the UN headquarters in New York, USA. 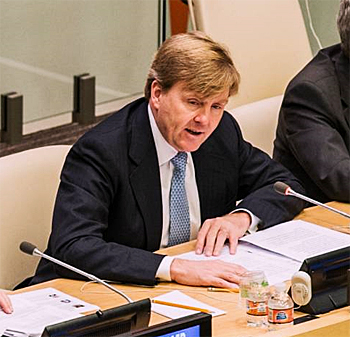 Former 'rebel with a cause', Dutch king Willem-Alexander.

Full bucket of water challenges
"Global UN goals must now be converted into regional and local actions. An effective international water architecture to realize these SDG’s is necessary", the king continued.

"Once again, we have to roll our sleeves up", and he phrased the words of UNSGAB's finale report: the bucket of water challenges remains quite full.

King Willem-Alexander chaired the UN's elite board of water experts from 2006 till 2013.

Breaking taboos
In a short speech he reflected on UNSGAB's achievement and his involvement. 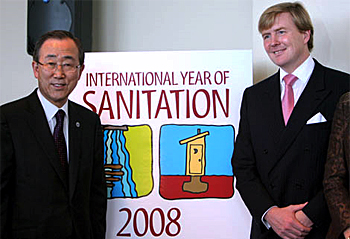 UNSGAB initiated the International year of sanitation in 2008.

Rebels with a cause
King Willem-Alexander considered it a bold decision of Secretary-General Kofi Annan to establish this Advisory Board back in 2004. Members were invited to work in a personal capacity.

"Rebels with a cause. That is how some people saw us. UNSGAB acted as a free spirit within the UN. This unorthodox approach paid off!" he said.

According to king Willem-Alexander much remains to be done. He specifically mentioned the growing urban water crisis and a bigger involvement by private sector and civil society.

According to the final report here is a mismatch between the integrated and ambitions 2030 vision of freshwater and sanitation on the one hand, and the international political structures that are available to contribute to its implementation.

Download the finale report The UNSGAB Journey (as a pdf file).