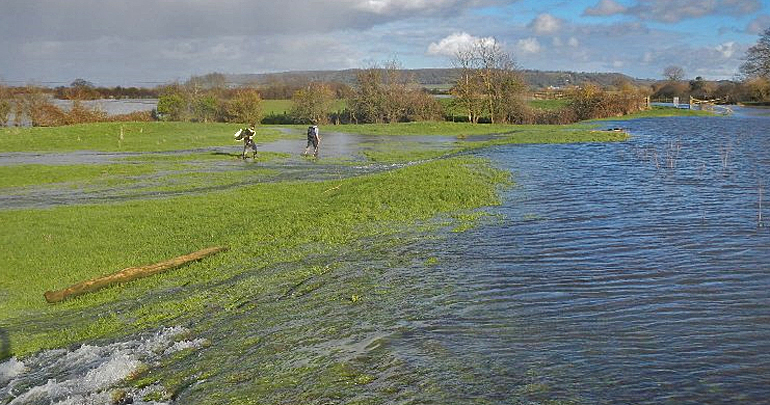 Four Dutch inspectors assisted the Environment Agency in assessing the levee conditions on the flood-stricken Somerset Levels for a week.

Everywhere the ground was saturated but given the circumstances the condition of the levees in general was reasonable. This was reported back by the Dutch inspectors.

Inspector Wijnand Evers of water board Groot Salland made a photo series while inspecting the clay levees of the Parrett river, together with his British colleague Richard Bull of the Environment Agency.

Evers was part of the Dutch inspection team together with Peter Blommaart and Erik Bijlsma of Rijkswaterstaat - the executive arm of the Ministry of Infrastructure & the Environment – and Theo Reuzenaar of water board Hollands Noorderkwartier.

Photo above: water overtops the levees bordering the Parrett river. 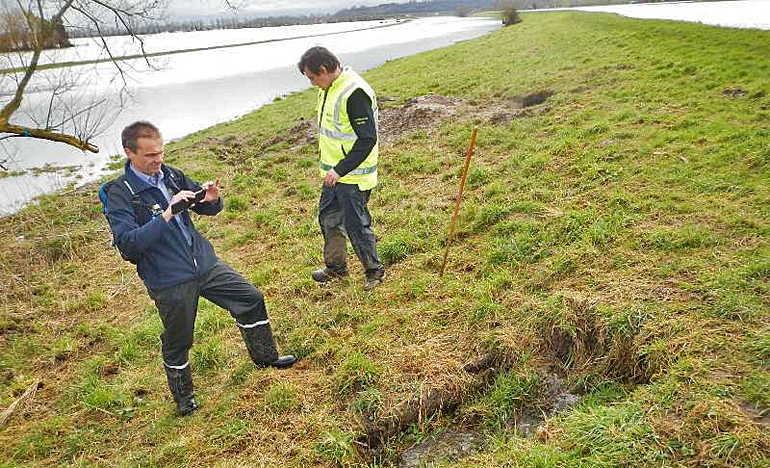 Evers (left) inspects the levees the Dutch way. In his backpack he has his special notebook, equipped with GPS and the Digispectie software programme to record all different kind of damages, such as a hole, a tear, a well or an overtopping. Additionally he takes pictures of every damage he discovers. Back in the office he writes his final report.

The hole in the back is believed to be a badger's burrow. Evers noticed that all animals living underground, like badgers and rabbits fled to dry grounds. In this case to the top of the levee. Their burrows weakens the levee, he warns.

Another threat to the levees are trees. Several storms hit the Levels and uprooted many trees, luckily this one managed to stay up.

Evers and his Dutch colleague Theo Reuzenaar (right) encounter a 'men-at-work' sign on the levee of the Parrett River.

Also read the press release on the Dutch inspection team by the Dutch ministry of Infrastructure and Environment.

See more pictures of the levee inspection by Wijnand Evers on the website of water board Groot Salland.