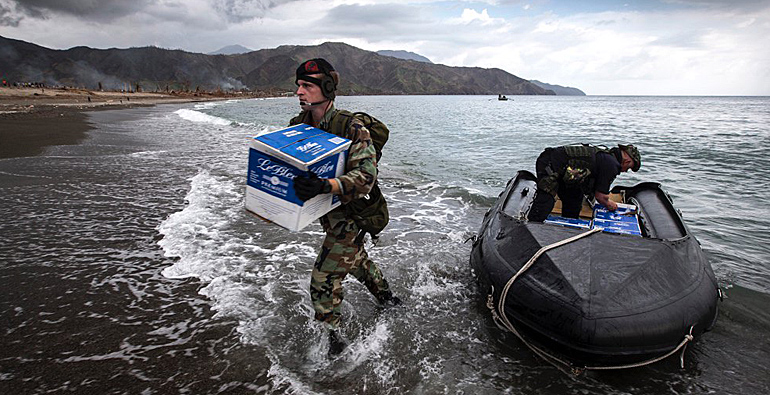 The Dutch military aid operation has now come to an end, after the devastating passage of Hurricane Matthew on 5 to 6 October.

Dutch military personnel on board the two ships concentrated their relief efforts on the west coast of the island, where emergency aid goods had not yet reached all of the villages. 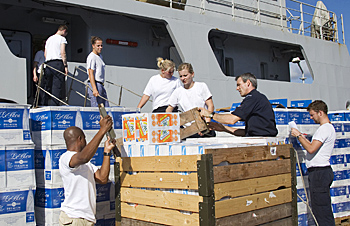 Loading of bottled water aboard of Ms Pelikaan in Curacao before departure to Haiti.

The soldiers also brought water and food to the town of Les Irois.

Aid organizations received the goods and distributed them further inland. The population in both fishing villages sat for days without help.

Personnel from the navy´s hydrographic service mapped the seabed and determined whether ships could safely moor in the harbours of various coastal towns. 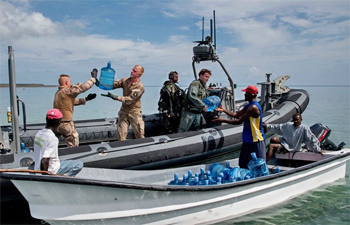 Shelterbox
Aboard Ms. Holland were some 200 boxes that were supplied by disaster relief charity ShelterBox. The organization had immediately dispatched these boxes from its store in Panama, to Curacao where they were taken aboard the navy ship.

The content of the Shelterbox included water filtration equipment, solar lighting to assist during electricity black outs, and blankets for warmth.

Close collaboration
The deployment of both ships took place in close collaboration with representatives of the Haitian government, the World Food Program and organizations such as the European Union Civil Protection Mechanism, a coordination team consisting of experts from different nationalities, and the United Nations.

Both Ms. Holland and Ms. Pelikaan have returned to their naval base at Curacao.

This news item was originally published on the website of the Dutch Armed Forces (in Dutch only).