What are you looking for?
News 8 September 2017

The water supply to the island of Saint Martin, caused by the hurricane Irma, is one of the top priorities of the relief operation by the Dutch Navy.

Immediately after the passing of the hurricane, the navy’s vessels Zs.Ms. Zeeland and Zr.Ms. Pelican arrived in the harbour of the island. Saint Martin is an independent nation and, together with two other Caribbean islands, it is part of the Kingdom of the Netherlands. 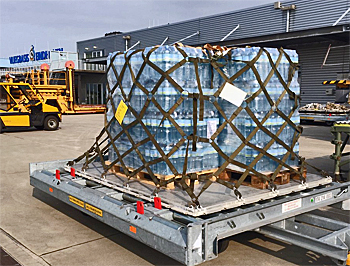 Pallet with water bottles at Eindhoven airport, the Netherlands, ready for shipment to Saint Martin.

Emergency aid
According to the Dutch Ministry of Defence, the water supply on the hard-hit island is one of their priorities. For first emergency aid, the navy is suppling drinking water in bottles.

As soon a circumstances allow, the desalination installations aboard the two naval vessels will be used to provide more drinking water to the island.

The third step in the process is to restore the local normal drinking water supply, but the damage to the island’s water supply system has not yet been assessed.

Relief by air
A C-130 Hercules of the Dutch air force is on its way from the Netherlands and will land at the airport of Saint Martin (on top photo) as soon as the runway is accessible.

The relief operation is under time pressure as it may have to be stopped in the coming weekend as a second hurricane is heading towards the island.

More information
Ministry of Defence
The Hague, the Netherlands
+31 70 318 81 88
www.defensie.nl/english

The first aerial images of the enormous devastation on Saint Martin from a helicopter of the Dutch navy.