Dutch photographer Cynthia Boll started a media campaign in Jakarta, Indonesia, to raise awareness for the real cause of the huge water problems in the city. Earlier this year Boll followed four citizens and recorded how the floods affects their lives.

Boll wants to bust the flood myth of Jakarta. This month she started a website and opened a Facebook page to tell the stories and showing the pictures of these four people, who live - together with 20 million Jakarta citizens - behind a small 40 years old sea wall.

During her stay in Jakarta Boll noticed there is little awareness of the flood risks. What worried her even more was the fact that there is no understanding on the real cause of the problem: land subsidence caused by groundwater exploitation.

The photographer got involved in the water problems of Jakarta after reading about the Giant Seawall project and the involvement of Dutch and Indonesian experts in finding solutions and developing a master plan. 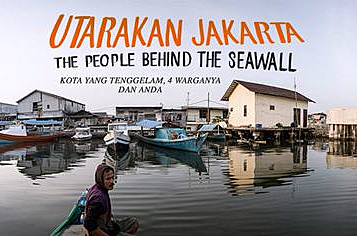 On the campaign website are the portraits of a school girl, a fisherman, a bicycle tourist guide and an entrepreneur, living in North Jakarta behind the sea wall.

It captures their struggles with floods, a sinking house and the costs of drinking water in a subsiding city. 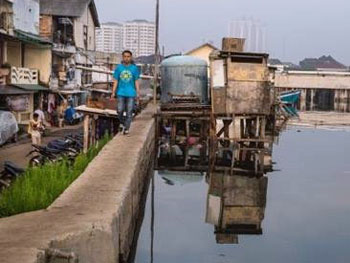 Root cause
In addition to these personal stories, the website gives expert opinions about causes and solutions of land subsidence, waste and pollution, preservation of the coast and green space and the importance of history and cultural heritage.

Jakarta is sinking between 7.5 to 25 cm per year. Economic development and a growing population are causing an excessive and unregulated extraction of deep ground water.

The Indonesian capital relies on a small 40-year-old seawall that is supposed to keep the Java Sea from inundating the Northern part of the city.

This 30-kilometers seawall is also sinking at an alarming rate.