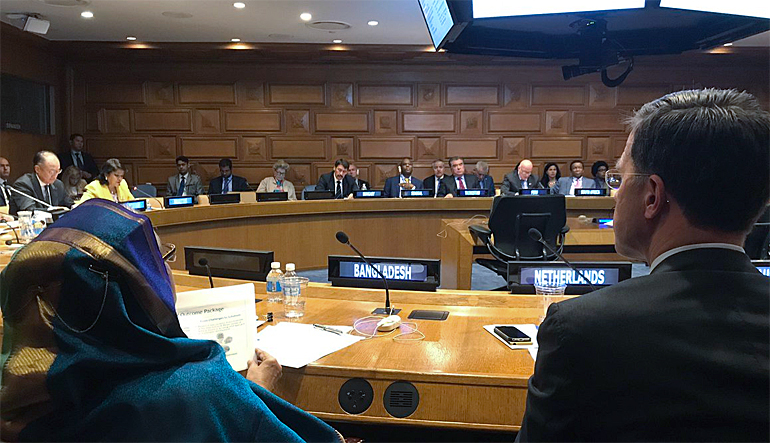 ‘Valuing water means so much more than simply putting a price tag on different kinds of water usage. If we know what water is worth to each stakeholder we can optimise trade-offs and augment the total value of water to society’, said Dutch Prime Minister Mark Rutte in New York on 21 September.

The Dutch prime minister attended the annual General Assembly of the United Nations and, as one of the eleven heads of state, he was also present at the meeting of the High Level Panel on Water. 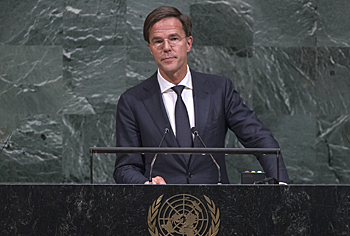 Dutch prime minister Rutte praised the progress of the working group at the HLPW meeting in New York.

Good progress
‘So far this panel has made good progress on the crucial issue of valuing water’, Rutte said, ‘which is key to all the water-related SDGs.’

‘Valuing water means so much more than simply putting a price tag on different kinds of water usage’, he said. ‘If we know what water is worth to each stakeholder we can optimise trade-offs and augment the total value of water to society’.

Prevention of conflicts
In his speech at the UN General Assembly the Dutch Prime Minister advocated a ‘strong United Nations in a safe and sustainable world’ and he reaffirmed that the Netherlands will dedicate itself to this goal.

The Dutch Prime Minister believes that prevention is the key concept when it comes to security. He would like to see more missions aimed at stopping conflicts before they get out of hand and more cooperation in the fight against terrorism.

According to Rutte, sustainability is the "ultimate agenda" to prevent violence and conflicts. He believes that implementing internationally agreed goals to, for example, end poverty and hunger, will help combat the root causes of instability and conflict.

Deploy Dutch expertise
Rutte said that the Netherlands is keen to share its expertise on water management with the rest of the world.

‘Working together on water issues is more crucial than ever before’, he said. ‘The UN predicts that by 2050, 200 million people will have become displaced because of climate change. Water plays a key role in almost all SDGs’, Rutte said.

‘We learn most by working with others and by sharing knowledge. We deploy our expertise all over the world, for example in projects in Vietnam, Peru, Myanmar and Bangladesh. It’s one of the reasons why I’m a member of the High Level Panel on Water.’

The full text of the concept paper Valuing water: preamble and principles can be downloaded (as a pdf-file) here.

The concept paper can be commented on the HLWP website.

The final version of the principles of valuing water will be presented at the 8th World Water Forum in Brasil in March 2018.

Plea by the World Bank to take the value of water more profoundly: water today is undervalued, misused and misallocated. Too many of us take it for granted.

Live stream of the speech by Dutch prime minister Mark Rutte at the 72nd United Nations General Assembly in New York on 20 September.