Addressing the High level meeting on Integrated Mekong Delta  Development in Hanoi on June 17, Rutte stressed the need to draw up a clear strategy for implementing the plan and said the Netherlands is ready to share its experience in climate change adaptation and water management with Vietnam.

Prime Minister Mark Rutte paid an official visit to Vietnam. He was accompanied by Minister for Agriculture Sharon Dijksma and a trade delegation consisting of representatives of 22 Dutch companies. 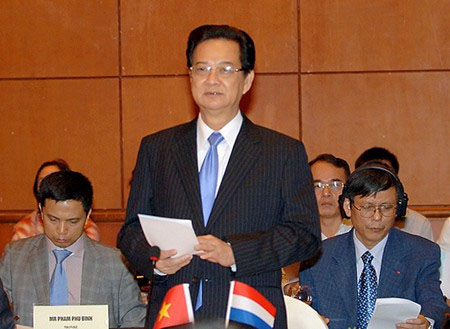 Investment plan
Together with representatives of the World bank, Asian Development Bank, United Nations Resident Office and ambassadors of several donor countries, they talked about an investment plan for a sustainable development of the Mekong river delta.

The Mekong Delta Plan is a Vietnam-Dutch developed strategy  for a safe and sustainable delta. Both countries worked four years on the plan that was finally presented late 2013.

Prime Minister Nguyen Tan Dung said: “I appreciate the support of the Dutch government, the World Bank, and Vietnam’s development partners in recent years. Vietnam is calling for continued support in adapting to climate change in Vietnam and in the Mekong river delta in particular. The Vietnamese government is committed to the effective use and management of ODA capital.” 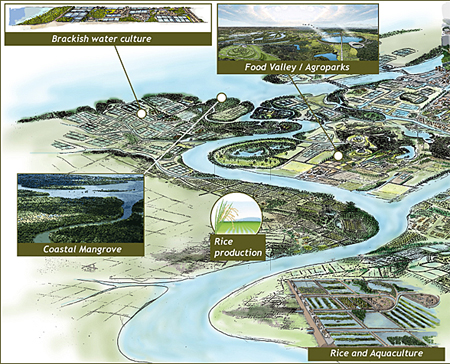 Institutionally embedded
Dutch prime minister Rutte: "Now it’s time to turn words into deeds. To succeed, ambitious, long-term projects like the Mekong Delta Plan need a clear strategy. And they also need to be properly embedded from an institutional and organisational point of view."

Rutte continued: "The Mekong Delta Plan will help tackle one of the biggest challenges facing the world – how to cope with the impact of climate change."

"The other great challenge, of course, is how to feed nine billion mouths by 2050. Just like the Netherlands, the Mekong Delta is a very fertile region with immense agricultural potential. How can this potential best be exploited?", asked Rutte at the opening of the meeting.

This news item is based on publications of the websites of Vietnam Breaking News, Dutch government and NWP (Dutch only).

More information
Ministry of Infrastructure and Environment
The Hague, the Netherlands
+31 70  456 00 00
www.government.nl/issues/water-management