The pilot-installation AW75-unit Dutch Rainmaker, installed on behalf of the Kuwait Environment Public Authority (KEPA), has been validated for water-production. This was announced by Dutch Rainmaker on 4 September.

Water supply in arid areas
According to Dutch Rainmaker, the 'water-out-of-air' technology had already been proven in earlier pilots and concept phases, and now it has been successfully applied to a challenging region where it can add significant value.

The fact that this installation is now fully operational and has generated water out air confirms our technology is equipped to solve real-world problems. 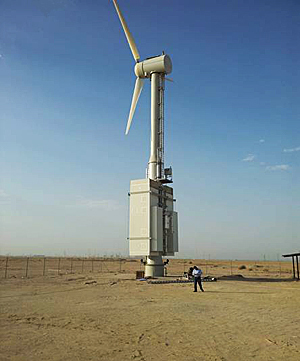 Important new reference in Gulf region
With this breakthrough technology the KEPA is the first entity in the Middle East to successfully implement Dutch Rainmaker’s application in air-to-water systems. It also confirms the technology as a suitable solution for the region.

Dutch Rainmaker intents to use this success to gain more projects and installations across the region and the rest of the world.

Currently discussions on expanding the capacity of the KEPA project are being undertaken.

About the Air-to-water concept
The Dutch Rainmaker concept is a system whereby a stand-alone wind turbine is placed in rain lacking regions. This system is especially suited for such environments without proper infrastructure and access to water sources. 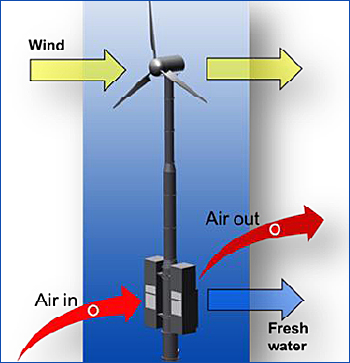 Because the turbine forces air through a heat exchanger — where the air is cooled, condensation takes place.

When the temperature falls below its dew-point, water droplets will form and will be collected in a water storage compartment of the Dutch Rainmaker AW75.

Warm ambient air, in particular, may contain large amounts of water. Lowering the temperature of air requires relatively little energy. By doing so large volumes of water become available by condensation and can be utilized as drinking water or irrigation water.

This news item was originally published on the website of Dutch Rainmaker.