A field study by researchers from Utrecht University, Wageningen University, Future Water and knowledge centre ICIMOD in Nepal shows that increased melting of glaciers and more rain along the Himalayas is likely to enhance the flow of water into the big rivers.

The researchers - including Walter Immerzeel, Niko Wanders and Arthur Lutz (fltr top photo) - concluded that the discharge by Himalayan rivers will increase over the next few decades, despite the shrinking of the glaciers.

By using a new mathematical model they got a better understanding of the changing contribution to the discharge from glacier melt, snow melt and precipitation, as well as the distribution of water throughout the year

The research results were published on June 1 in the journal Nature Climate Change. 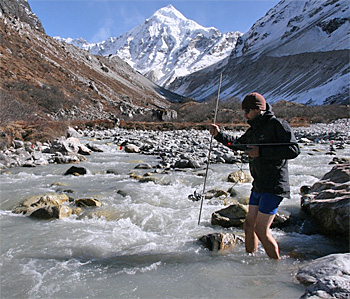 A group of scientists assessed the importance of melt water for the Indus, Ganges, Brahmaputra, Salween and Mekong rivers and discovered how climate change will alter river flow in the coming decades. The findings of the study will be important in shaping climate change adaptation policy in the twelve riparian countries surrounding these river basins.

Increasing glacier melt and precipitation
The scientists used a new model to study the entire river basins in unprecedented detail. "Our results show that the river flow will increase at least until 2050, despite retreating glaciers", says Arthur Lutz, a researcher at FutureWater and a PhD candidate at Utrecht University.

Lutz: "The glaciers feeding the Indus River, although retreating, will generate increasing amounts of meltwater in the coming decades due to higher temperatures. For the other rivers, the increase in river flow is mainly caused by increasing precipitation."

His colleague Walter Immerzeel corroborates his claim, saying, "These results confirm on a larger scale what we already discovered last year for two small watersheds in the Indus and Ganges basins." 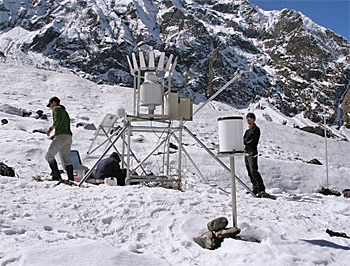 Uncertain in the long run
The scientists emphasize that their projections are only for until 2050. Scenarios for the distant future, or until the end of the century, remain uncertain, in particular for the Indus River where melt water is most important.

"Until 2050, the net glacier melt will increase despite glacier retreat,” Lutz explains. “If glaciers continue to retreat, at some point in time there will be a net decrease in melt water", Immerzeel adds. "For the Indus River basin, some models predict increasing precipitation, while others predict decreases in precipitation. In the other river basins all climate models generally agree that precipitation will increase."

Tailoring climate adaptation policies
The findings are part of a larger research programme titled Himalayan Climate Change Adaptation Programme. According to Arun Shrestha from ICIMOD in Nepal, "Our findings provide essential information to climate change adaptation policy makers in the twelve riparian countries of these rivers. Not only knowledge of changes in the total flow, but also better understanding about how the distribution of water is going to change throughout the year. This will help in tailoring climate change adaptation policies to protect people and their livelihoods."

More research on extreme events
Besides extending the projections from 2050 to the end of the century, in their future work the researchers will focus on how the extremes in river flow will change in the remainder of the century. As Lutz says, "We now understand how the total flow will change and which seasonal shifts may occur. However, changes in extreme events such as floods and droughts have yet to be projected in the Himalayas."

This news item was originally published on the websites of ICIMOD and Utrecht University (Dutch only).