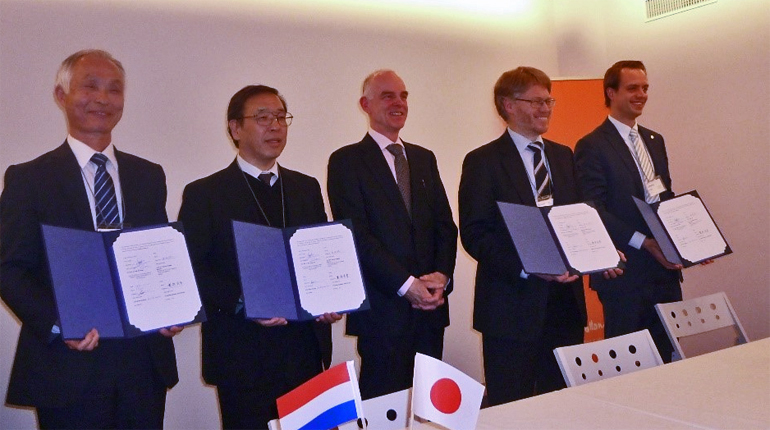 Two TU Delft researchers will participate in the third International programme on ocean energy for young researchers in Japan.

This participation is one of the first activities under an agreement that was signed by four Japanese and Dutch parties on Ocean Thermal Energy Conversion (OTEC) on 8 February, in Tokyo, Japan.

In the presence of Dutch ambassador in Japan Aart Jacobi (middle on top photo), the agreement was signed by four parties. On behalf of the academia the agreement was signed by professor dr. Shuichi Nagata (second left) of the Institute of Ocean Energy of Saga University and by Henk Polinde (second right) of the Ocean Energy Platform of Delft University of Technology.

On behalf of the industry it was signed by Sadayuki Jitsuhara (left) of Japanese manufacturer of heat exhangers Xenesys and by Joost Kirkenier (right) of Dutch OTEC technology provider Bluerise.

100kW OTEC demonstration plant at Kumejima Island, near Okinawa, Japan, which has been built by a consortium of companies including Xenesys. Saga University

New heat exchanger
One of the first activities under the agreement is the participation of two researchers of the Delft university of technology in the 3rd International Program on ocean energy for young researchers in Japan.

Another collaborative activity is the development of new heat exchangers for large scale OTEC plants. There is much to gain using the latest advancements in materials, manufacturing techniques and computational capacity.

Seminar on breakthrough technologies
For the occasion the Dutch embassy in Tokyo had organized a seminar on developments in the field of OTEC and other innovative Marine Energy Solutions.

It gathered a big audience of people working on these breakthrough energy technologies and helped promote our partnership.

Among others, the development of new and improved heat exchangers for large scale OTEC facilities was discussed, being one of the key factors for efficient, economic and sustainable OTEC systems. Partnerships between industry and academia are of vital importance to validate research findings and commercialize applications. 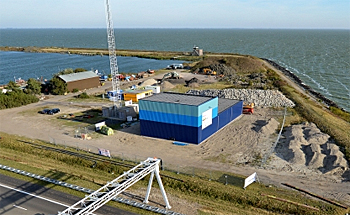 REDStack plant on the closure dam Afsluitdijk, the Netherlands, that produces electricity by reverse electro dialysis, using fresh and salt water from each side of the dam.

Visit to the Netherlands
The signing follows a visit of a Japanese delegation to the Netherlands in November last year. The Japanese experts attended the fourth International OTEC conference and visited some of the innovative Dutch marine energy companies and test facilities, such as Tocardo, Fishflow Innovations, REDstack and the Tidal Testing Centre at the closure dam Afsluitdijk.

About Ocean thermal energy conversion
Ocean Thermal Energy Conversion (OTEC) is a marine renewable energy technology that generates electricity by exchanging heat with the warm water from the ocean surface and with the cold water from the deep ocean.

The exchanged heat drives a Rankine Cycle, which converts it to electricity. The technology is viable primarily in equatorial areas where the year-round temperature differential is at least 20 degrees Celsius. 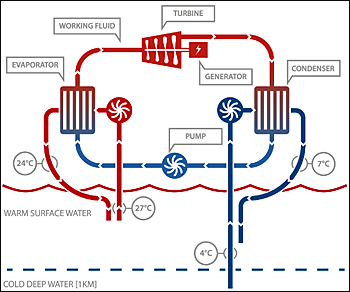 About Bluerise
In cooperation with the Delft university of technology, the Dutch start-up company Bluerise designed and constructed a room size demonstration of an advanced OTEC power plant.

The small-scale working power-extraction cycle is a ‘proof-of-principle’ and a real innovation, since it will be the first mini OTEC plant demonstrating the chosen advanced cycle.

This news item was originally published on the websites of Ocean Energy Platform, Saga University and Xenesys.

Video of the presentation of the EU funded project Energising deltas that combined sustainable energy generation with water safety and water management.