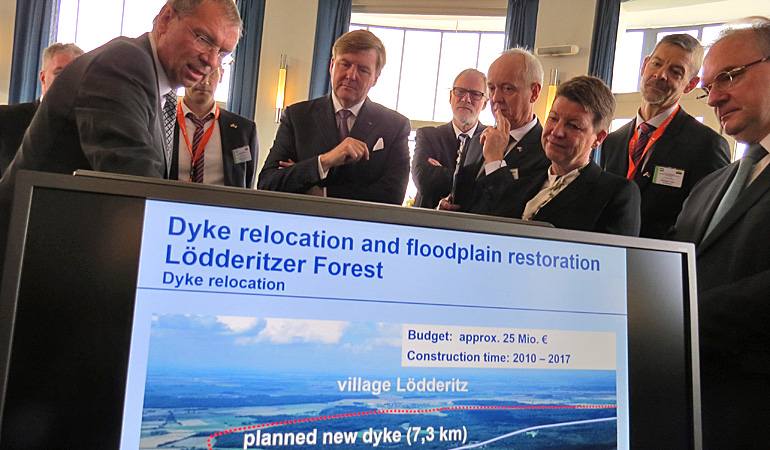 Dutch king Willem-Alexander and queen Máxima attended a German-Dutch exhibition on flood protection technology related to the restoration of the Elbe river, following the massive floods in 2002 and 2013.

The exhibition took place in the Unesco world heritage Kornhaus building on the banks of the Elbe river in Dessau, Germany on 10 February. It was held on occasion of a Dutch trade mission and a four-day visit of the royal couple to Germany.

The participants exchanged views on the development of tools for real time monitoring of water levels, early flood warning systems and flood evacuation information to residents.

The latter is still controversial as its requires authorities to acknowledge that – despite all protection measures that have been taken – there always remains a flood risk, no matter how small. 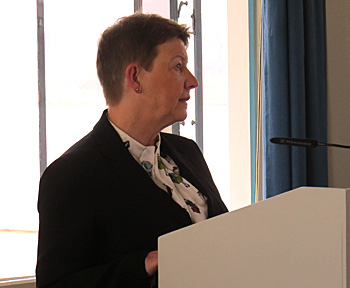 More retention capacity along Elbe river
The royal couple was accompanied by Environmental minister Claudia Dalbert of Saxony-Anhalt and Infrastructure and the Environment minister Melanie Schultz van Haegen of the Netherlands.

Saxony-Anhalt minister Claudia Dalbert reminded the German and Dutch participants of the exhibition of the urgency to develop tools to prevent river floods. Large areas in her state were flooded in 2002 and 2013. The dike breach in 2013 costed her federal state of Saxony-Anhalt 1.7 billion euro she said.

“In four years’ time some 532 million euro will be invested”, she continued. “This will include many technical measures, but we need to balance these with nature-based measures. By relocating our dikes we intend to increase the retention capacity with 10.000 hectare.” 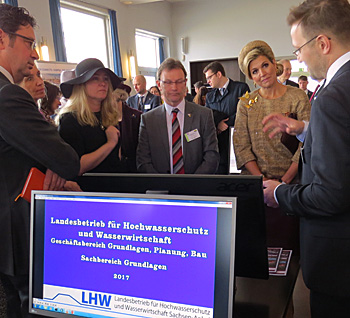 Sharing experiences
Dutch minister Schultz offered the assistance of Dutch flood experts that have been involved in the Room for the River programme. This programme included some 30 projects along the Rhine river, many of which were based on dike relocation.

“We have fifteen years of experience now”, she said. “and the results are already visible. Our flood plains are not only safer, they even look nicer.”

The Dutch firm HKV developed an app that can be used by residents in flood prone areas to predict the potential water levels in case of a flooding.

According to science director Bas Kolen at HKV most flood early warning tools have been developed to be used by professionals at water boards or disaster relief organisations. “Our app is specially made for residents. For every postal code in the Netherlands, the app shows the probability of flooding including the depth of the flooding at the given location”, he explained.

For the occasion of the exhibition, HKV developed a German version of the app, called Uberschwemm Ich?. 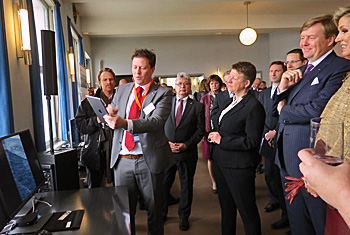 Schreiter showed the national Hochwasser portal that provides real-time water levels at some 1.600 river locations. “Last year we also introduced an app for residents to check for the actual water levels”, he explained.

Both Kolen and Schreiter said to be interested to explore a possible combination of their apps in order to further increase the flood risk awareness and self-reliance of communities.