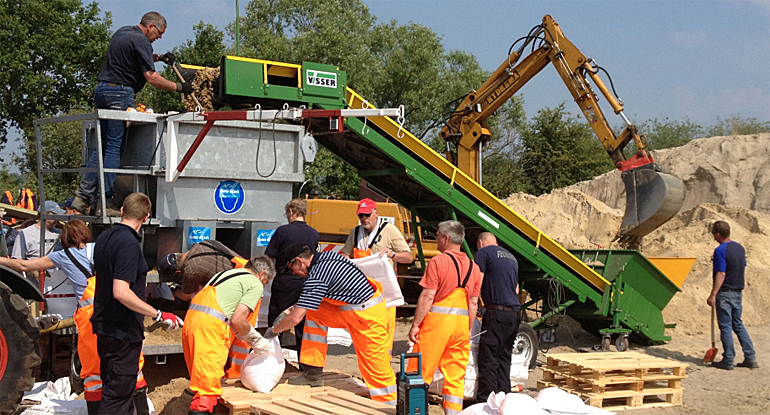 Following the heavy rainfall in Central Europe last week, a flood-wave surge moves along the Elbe towards Hamburg and finally to the North Sea.

To prevent the river to flood near Amt Neuhaus 21 kilometers of levee are raised 30 cm with sandbags.

Over 1000 soldiers, firemen, civil servants and volunteers mounted over a million sandbags brought in from Denmark, Finland, Belgium and the Netherlands. 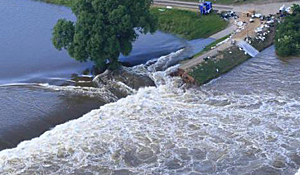 A breach near Fischbeck caused local floodings but lowered the flood-wave surge downstream.

Flood-wave surge
It is uncertain whether the flood crest will reach the additional stacked sandbags as a major levee breach upstream caused a considerable level reduction.

Yet the situation near Amt Neuhaus will remain critical for many days as the levees can weaken and give way under the weight of the water. 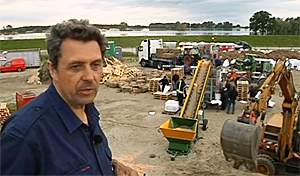 According to Hendrik Huls of water board Hunze en Aa's it took the trucks with the filling machines and 20.000 sandbags some time to reach their destination. The trucks had to cross the river and many roads were blocked. "Once arrived, we could quickly assemble our machines and started to produce sandbags. This relieved the hard work of the volunteers who were filling the huge amount of bags by hand and shovel."

Specially designed
The water board Hunze en Aa's purchased the specially designed sandbag filling machines after the near-floodings in January 2012. Heavy rains hit the north of the Netherlands and some levees almost overtopped while others threatened to breach as they were undermined by piping.

The water board reacted quickly by placing many sandbags that were mainly filled by hand. By purchasing the two filling machines the water board is able to react even better and more quickly.