The study is part of the national Dutch TKI research programme on water technology.

Corrosion prevention
Industry uses open recirculating cooling water systems on a large scale for the dissipation of low-grade, excess heat to the outside air.

Due to evaporation the recirculated cooling water thickens and, in order to avoid the build-up of excessively high salt concentrations (scaling, corrosion), it is necessary to drain off some of the water and top up the system with fresh makeup water.

In order to prevent scaling, corrosion and microbiological growth (bio-film formation) chemicals are constantly added to the recirculating cooling water. 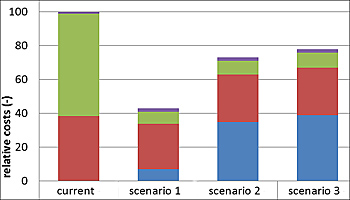 Softening makeup water
According to the researchers, model calculations have shown that the softening of the makeup water for cooling water systems can result in a reduction in the consumption of both water and chemicals.

This is because a higher thickening factor can be maintained, increasing the number of cycles of concentration.

Whether partial softening of makeup water is indeed economically feasible, depends on the local availability of water, the costs of the water and the energy costs.

The researchers recommend that softening of makeup water is considered when designing cooling water systems because this can potentially be a less expensive and more sustainable solution.

Three softening technologies
The economic feasibility of partial softening, is strongly influenced by the local availability of water, the costs of water and the costs of energy.

Of three scenarios with different softening technologies that were studied, it appeared that the combination of cation and anion exchange (CIEX/AIEX) is the most beneficial based on operational costs.

This is mainly due to the relatively high investment costs (and depreciation costs) of pellet softening, which forms part of the other two scenarios.

This news item was originally published on the website of KWR Water cycle institute.