It is for the first time Tocardo's turbines are installed closely together in an array.

The three turbines are expected to have a capacity of more than 300kW. If the pilot proves succesful, the project partners want to increase the number of turbines to 15, with a capacity of up to 2 MW. 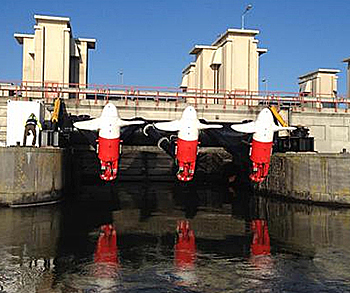 The array of three tidal turbines in one of the discharge sluices in the Afsluitdijk at Den Oever.

Governor Konst said: "The opening of the new pilot plant is a new step in our ambition for renewable energy. If the technology proves itself, we can combine it with the planned reinforcement of the closure dam. In that case we can raise the protection against flooding, and realize an energy neutral dam at the same time".

The pilot project is managed by Dutch Tidal Testing Centre, a partner of Tocardo, and energy company Greenchoice will buy and distribute the electricity via the Dutch grid.

The Tidal Testing Centre is already producing electricity with a single Tocardo turbine at a nearby location since 2008. 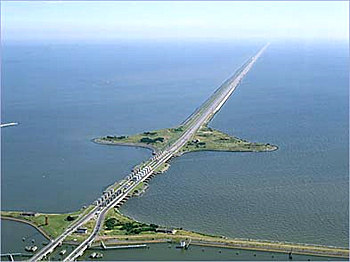 At ebb tide 15 sluices in the Afsluitdijk at Den Oever discharge fresh water from the lake IJsselmeer (right) into the Waddensea (left).

Several research institutes and private companies have joined the agency, studying options to combine a higher and sufficient safety level for the hinterland and the production of sustainable energy.

One of the innovative ideas led to the opening of a pilot plant last year by Red Stack to produce electricity directly from the difference in salt concentration in the surface water on each side of the dam.

This news item is based on a press release published on the website of Energising Deltas (in Dutch only).